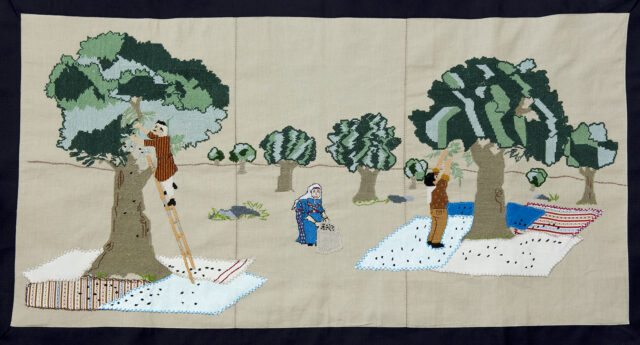 After finishing my literature review, I’ve realized that the focus of my research has shifted a bit. The majority of my poetic sources originate from Palestine and I’ve noticed that the symbolism of the olive is most pertinent there. I think it will be most effective to talk about the place of olives within the greater Middle Eastern and Mediterranean cultures, then turn my attention to how the olive is widely used and employed as symbolism in Palestine. This shift in focus felt like a natural one; the more I read about olives and the more poetry I surveyed from the region, the clearer it became that there are distinct, dynamic examples of olive as cultural symbol in Palestine that are far more layered than the olive symbolism in other countries. I eventually realized that it would be the most expedient and beneficial to focus more deeply on one country’s symbolic wrestling with the olive than to try to explicate the many meanings that an olive holds across multiple countries.

With this shift in focus, I have been able to start my paper with a clearer mindset and a more distinct path. It has also proved very useful since my plans to conduct an oral history fell through due to unforeseen circumstances with my subjects. Now that I am focusing on Palestine, it would be a bit unnecessary to interview Turkish olive farmers so perhaps things worked out for the best. After talking to two Gallatin professors who specialize in Middle Eastern studies, I have also been able to better specify my central research questions and compile a more well-rounded list of works to aid my research. The guidance I received from these professors was very helpful for me in beginning the daunting process of actually writing my paper. In these next couple weeks, I will work on honing my thesis and adding precision to my points––I will finish my paper!