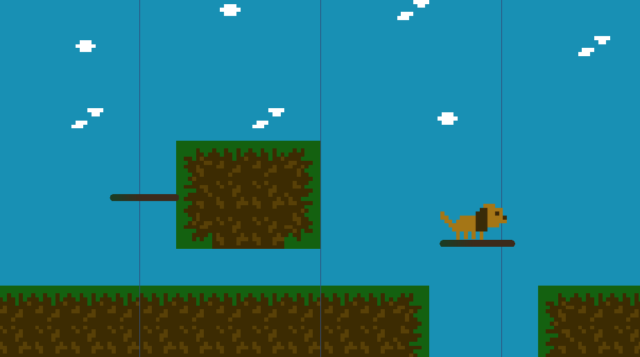 For most of July I have been focusing on completing the mechanics and design of the video game, so that it most effectively works with the neural network that is creating the soundtrack. I have worked with game design before, but this project is the first time I was responsible for all the animation of the characters and mechanics. The player character has four states: standing, running, jumping, and crouching. For each of these states I drew 2-3 frames for the animations, to keep it simple but dynamic. The frames for the standing state are shown below, there are two frames that move up and down so the character is less flat and motionless while standing still.

The art shown in this post is preliminary, and I plan to hire an artist to create more detailed character and level art once I have created all the concept art / demo art for the game. While working on the art for the character I had a discussion with my research mentor about what the initial soundtrack would be. I decided since many role player games include a character creation screen before the start of the game, I wanted to include a simple version of that as well. Users can choose the primary and secondary color of their character, as well as certain accessories. That way, instead of the initial soundtrack being random, it will be directed by the choices made during their character creation.

The main mechanic of the game is the ability to draw new platforms within the level to move around more freely. That mechanic is finished, and a still of the level before and after new platforms have been drawn is shown below.

The art for the platforms is also very preliminary, I plan to have the platforms look like dirt, to match the rest of the level. The background of the game uses a tiling system, so I can draw in the sky, clouds, and dirt platforms easily using Unity’s built in tile system.

While the player progresses through the game, the amount of platforms they are able to draw will increase, alongside other upgrades to the platform drawing mechanic. Their combat abilities will also upgrade. Both of these mechanics will upgrade using an XP (experience) system, based on which game experience they favor in their playthrough. The “platform XP” and the “combat XP” will affect the neural network creating the soundtrack, and the ratio of the two together will have an effect as well. For example, if both are high but equal, the soundtrack will sound different than if combat XP is significantly higher than puzzle XP.

As of now, the entire game (level design, story, connections to neural network) is planned out, and the mechanics of the game are completed. Now I still have to flesh the plan out in Unity, and connect it to the general neural network I have currently. This neural network will go through many changes so that it can be specifically applied to the game and the story progression, which will come after the game is mostly completed.