Haiying Niu reads "Found in Translation: How I Got My Dream Job"

When we come to a new place, we always make new friends, and some beautiful stories may happen.

Since I moved to New York City, I have been living in midtown Manhattan, near the East River. In my leisure time, I like walking along the riverside, especially when the weather is nice. Over the river, many seagulls glide over the mirror-like surface of the water. The breeze gently brushes my cheeks, and the special smell combining the river and the ocean mesmerizes me and takes me to the other side of the sea. It is such a soothing place that it made me fall in love with this city.

One day, when I strolled as usual, I saw two elderly people talking. As I passed by them, the woman asked me in Chinese, “Excuse me, are you Chinese? Do you speak English?”

“Yes, I am Chinese, but my English isn’t good,” I replied.

“That is so great! Could you be the translator for us?”

Then I began my job. Since English is my second language, I was afraid that I couldn’t translate accurately. I listened to them carefully, not wanting to miss any important messages. Sometimes, I even had to ask them to repeat themselves, so that I could double-check what they really meant. While listening, I was also considering how to organize my language to make sure I didn’t get stuck. It was not an easy job for me, but I told myself, Relax and be confident!

The gentleman was very nice. When we talked, he tried his best to explain what had happened between him and the woman. I learned that the man had been feeding the seagulls as a hobby since he retired. Every afternoon, he brought fresh bread and took the M23 bus across town from his home in West Chelsea to the East River to feed these lovely birds. The woman was also retired. She came to New York City from China to visit her son, who works here. She liked to enjoy the river view, so she always walked here during her vacation. Then they met, and they fed the seagulls together. It was amazing. Even though they couldn’t speak each other’s language, through some simple words, such as “hello,” “thank you,” and “great,” they got to know each other. Most of the time, they used body language to express what they wanted to say. They became friends and met every day.

Today was different. The woman was anxious for someone’s help. She had to say goodbye to the man because her vacation was over, and it was time to go back to China. Since she could not explain this clearly, she needed a translator at that moment. That was why she had asked me for help. She needed me to tell the man why she wouldn’t be there next time. She was worried if she couldn’t come, he wouldn’t know what had happened to her.

Although my English was not fluent, I finished my job successfully and was very happy that I helped them. I was a translator and so proud! By the way, the man’s name is Ken, and the woman’s name is Li. We all became friends and keep in touch.

It was a special and pleasant experience for me. As a newcomer to this city, I received a lot of support from New Yorkers. This time, it was exciting that I had the opportunity to give back. I was also aware that communication is an important bridge to connect people from different cultures and backgrounds. Good communication will build trust, avoid unnecessary misunderstandings, and make the community more inclusive. For that, I will continue my English language learning to contribute to enhanced connections among people in this diversified city. 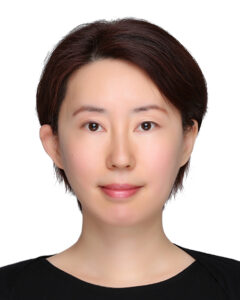 A native of Beijing, China, Haiying Niu has been living in New York City since January 2019. She studies at the Tompkins Square branch of the New York Public Library with Lead Instructor Kathryn Bonn. Stephanie Burnes is the hub manager. When Haiying Niu was a child, her career dream was to be a translator. She is very happy to have the opportunity to learn English in the United States.