*
I have to leave my home at 7 a.m.
I have a meeting with my boss at 8 a.m.
I can’t arrive late. It’s very important: It smells like a promotion.
It’s 6:55 a.m. I’m on time.
I leave my home directly for the station.
It’s so cold outside.
I forgot to check the weather.
I must go back home for my jacket.
It’s 7 a.m. I’m still on time.
. . .
All the traffic lights are red when I get to the corner.
I have not yet arrived at the station.
It’s not my lucky day.
It’s 7:10 a.m. I’m still on time.
I have walked for 10 minutes.
I’m feeling so cold.
Finally, I’ve reached the station.
Now, I feel hot. I want to take off my jacket.
I can’t do it. Maybe I could catch a cold.
It’s 7:20 a.m. I’m still on time.
I swipe my MetroCard once, it doesn’t work.
The second time, it doesn’t work again.
I look at my MetroCard, it’s on the wrong side.
Third time, it works.
It’s 7:25 a.m. I’m just on time.
Uptown or Downtown?
I always forget it.
It’s Downtown, bro. Come on! says my awareness.
I watch the departure screen.
The M line or the R line? Which train will arrive first?
I got it. The M line. This train will arrive in three minutes.
I’m waiting for my train.
It should be here right now. Something happened.
I keep watching the departure screen.
The M train is delayed. “Mechanical failure,” says the station’s speakers.
I asked myself: What will I do now?
My unique option: take the R line.
I watch the departure screen again.
The train will arrive in two minutes.
But I’m on another platform.
I have to run fast. I can only think one thing: This crap, again.
The train comes, and I’m still climbing stairs.
Someone yells: “Stop it, hold the door!”
Another person inside the train holds the door.
They are both my saviors.
It’s 7:35 a.m. I’m a little late.
. . .
I’m at the same stop. The train opens the doors.
Two minutes later. The doors are still open.
I can’t believe it. . .
“Mechanical failure,” says the station’s speakers again.
I say loudly: “Oh, my God, not again!”
But I think: I still have a chance: Get out of the train and run fast.
I’m not feeling cold because I’m running faster than Usain Bolt.
. . .
Finally, I’m in front of the building.
It’s 7:58 a.m. I’m late.
The office is located on the 22nd floor. I must wait for the elevator.
There are three elevators but there is always one damaged.
I’ve waited for five minutes. Finally, the elevator is here.
I go up in the elevator.
I greet the secretary.
I look at my watch. It’s 8:05 a.m. I’ve arrived late.
I will have to apologize to my boss. I won’t get the promotion.
I knock on the boss’s door once.
No one responds.
I knock on the door again. Zero . . .
I guess that he left the office because I didn’t arrive on time.
. . .
At that moment, someone touches my back and says, “Hi, how are you?”
It is my boss!
I’m so confused, I don’t understand anything.
“I apologize, the M train was delayed. I’m so sorry. You know, this is New York,” he says.
I can’t believe it. . .
I arrived on time!
It’s 9 a.m. The meeting has ended. I got the promotion.

I’m coming back home and I’m thinking about my day.
I come to this conclusion:
New York can be chaotic and exhausting, but I wouldn’t want to live anywhere else.
While I’m thinking about this, the train has to stop.
Someone is leaning on the train door. The train can’t continue on its way.
Here we go again, I think while laughing.
This is New York and I love the way it is.
*
* 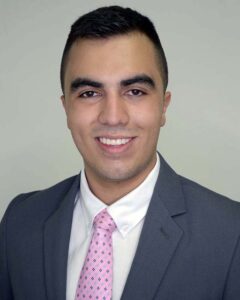 Santiago Gonzalez Izquierdo was born in Bogotá, Colombia. He is 23 years old and arrived in the U.S. in October 2021. He studied civil engineering at EAFIT University in Medellin. At the New York Public Library’s Stavros Niarchos Foundation branch, his ESOL teacher is Sandra Ham. He wants to speak English perfectly and would like to get a job as a civil engineer in New York. That is his goal, his American Dream.