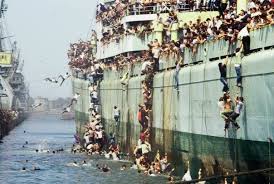 By 1990, Albania’s economy was in ruins, following the end of Communist rule. Social and political unrest was reaching dangerous levels. Italy, only 37 miles across the Strait of Otranto, became the focus of hope for tens of thousands of the uprooted.

In 1991 two waves of immigrants landed on the coast of Italy. In February and March huge crowds of unemployed and desperate Albanians crowed into the Adriatic port cities of Vlora and Durrēs, where they commandeered fishing boats, ferries, anything that would float – and headed to the Italian coastline of Puglia, a region marked by poverty and unemployment itself.

As many as 500 per day made the dangerous crossing; estimates suggest 20,000 arrived in the town of Brindisi that spring. The local population tried to accommodate the refugees and officials allowed them to travel north into France and Germany as asylum seekers. On August 7, 1991 a throng of as many as 20,000 people overwhelmed port authorities in the harbor of Durrēs, stormed the freighter Vlora, and demanded to be taken to Italy.

The Vlora was turned away from Brindisi, where the locals were still trying to assimilate the spring migration. At Bari, 55 miles up the coast, the captain was told to return to Albania; an attempt by Italian authorities to blockade the port with small boats failed. On board, the passengers had passed 36 hours without food or water, in broiling heat. Officials relented and allowed the ship to dock on a distant quay.

This time, however, the refugees were declared illegal economic immigrants, incarcerated in terrible conditions in a soccer stadium, and forcibly returned to Albania by a hastily organized flotilla of whatever ships the Italian government could enlist.

Twenty-eight years have passed and the dynamics, the need, the danger, the refusals continue unabated. Human migration is increasing, driven by political villainy, war, genocide, drought, crop failure, flooding, and climate irregularity. Fortress Europe and Fortress USA are building walls, but the enormous need for asylum will not be stopped by walls. What can be done to responsibly respond to this rising sea of desperation?