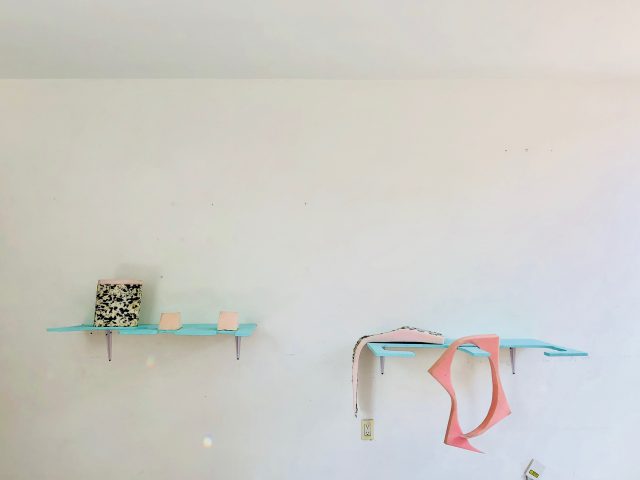 Starting work in the studio this past month, this “sort of a table design project” took a turn towards a more general study of means of embedding scores in sculptural objects.  The studio, where I have been working as a part of a residency with The Lab Program and Frontera Gallery in Mexico City, is situated one floor above an old-school body building gym. The gym, fairly unchanged since the 1970s, is equipped with almost entirely analog workout machines that became a bog point of study for me. The analog equipment achieves exactly what I aim to explore with the tables I build–objects whose form alone dictates/“scores” a physical interaction/experience. I began my process by making a small book of scores for the gym equipment.

“At Gimnacio Olimpico, there are no instructions posted on the walls alongside  the gym machinery and members primarily train solo, in silence. The equipment explains itself, each machine perfectly articulating its use through its own shape.  Within nearly all of the objects, furniture, and tools that we use daily are intrinsic scores or directions that instigate movement and “performance.”  Depending where one is in the world, people will approach a table with a set and immediately understood vocabulary of stances, gestures, and movements. Fast-paced music blasts from the speakers at the gym, merging with the sound of exercise into a hefty hum. Meanwhile, collages of retro body building magazines line the walls, watching over members with images of highly stylized bodies, an aesthetic of exhibitionist strength. The degree to which an object’s “score” defines a person’s physicality versus that to which social/cultural/aesthetic context generate performativity is hard to define. At the gym we can look very closely at this very fluid phenomenon.  The clear physical objectives of the machinery meets the highly performative environment of a body building gym:

blasting music or lack thereof [headphones, the erg of machines]

the performances of others “

My movement/scoring based research, done before starting work in the studio, led me to develop a set of design elements and criteria that defined the physicality at/of the table.

direction {of bodies, of attention, of eye contact, of social order, of time}

supported and shared weight {what or who is the table leg, what holds a group together? how is that responsibility distributed? physically? socially?}

In the studio, I began a series of four tables, each testing these criteria in some way, while using shape and form to search for new elements.

A table sustained by adjustable belts worn at the neck (or the hip, the hand, the leg) of four individuals and one couple. The group is tasked to collectively keep the table flat and the distribution of weight equitable.  In the absence of a member of the group (if someone leaves to go to the restroom) the rest of the group must take on the weight that person supported at the table.  Each individual action/gesture (reaching for an orange across the table) has a physical repercussion on the tasks of the others at the table.  Distribution of weight equates to distribution of power, social responsibility and group dynamic.

A series of linked and disconnected wood, foam, and fabric surfaces that can serve as tables and meeting spaces.  The sections extend out and fold onto themselves in a score that creates the possibility of many different shapes,  lengths, directions  and durations of the physical object itself  as well as the physicality around it. What is the social symbolism/gesture of extending, building onto, and morphing a table for others? What is the movement score of that social gesture?

TARP (for a duet and for a group)

A tarp sustained by the distance of the group of chairs it is tied to. A map of the space held between people in a group physically and socially. How is a table there when there is no real table top, legs, etc?  The table exists more as a social and contextual agreement between a group or between a set of gestures than as a physical object.

Two wall mounted table tops built with holes that facilitate several specific and ephemeral gestures and poses at the table. Supports in foam broaden movement potentials and interpretations of gestures. How much do objects such as tables predetermine our physicality and modes of interacting and gathering around them?  What possibilities for play exist by expanding our knowledge and vision of those embedded “scores?”

As the real “table making” process began in the studio, I found myself drawn to a study of material expressions of the DIY, extendable, expandable, and improvisational nature of tables as design objects.  Stools and tarps, ledges of carts, stacks of plates make temporary tables at the stands of street vendors that I pass on my walk to the studio around breakfast time.  Unlike a chair, which poses more traditional design questions like ergonomics, style, and comfort, the table is something that demands only “just enough” design. A person only needs the minimal surface and support to lay their coffee cup down and discuss business, read the news… In this way, the object-hood of a table is more action based than materially signaled. In the absence of a table, certain actions, gestures and ways of gathering generate a “table” immaterially or intangibly.  I think of artist/designer Andrea Zittel’s A-Z Carpet Furniture, “functional” installation pieces in which outlines of household objects (tables, beds, chairs, ottomans) are woven into carpets, signaling and facilitating the function of those objects by simply generating a referential space for them.  Perhaps more comparable to gymnastics equipment or stairs, the design “principles” for a table can be defined so sparsely as the ability to sustain weight or facilitate a certain action, gesture, or interaction.

Tables are a constant within our built environment, but still remain very fluid as objects. As more friends, family members, or customers arrive to a given social situation we extend, add makeshift additions to, or morph the physical space of the table.  A box can be turned over and serve to the same degree as a walnut dining table.  I became interested in making objects/installations that isolate the gesture of extending the space of a table (to invite others, to support more materials or actions) as an act that is both socially/culturally symbolic and also very much a kind of movement score.  This led to “table” sculptures that fold, turn, and extend onto themselves and that are left open ended to the possibility of infinite extension.  I stuck to agile hinges and wheels versus more permanent bolts and brackets. The materials I found myself attracted to mixed stability and fluidity, mainly using found plywood, upholstery foam, tarp fabric, and rope.

My process thus far has been comprised of writing scores, creating objects embedded with those scores, and then “testing” those choreographic/design hypotheses through collective movement practices through a workshop I have been running at the arts space Zona De Desgaste here in the Centro Historico of Mexico City.  We’ve worked primarily through open-ended group movement research and improvisations in relationship to the tables.  The group of movers engage the objects, trying to identify the scores within them, finding their own, and generating small group performance works. The tables I have made could be seen as stand alone installations or sculptural pieces.  However, I have not been able to fully conceive, build, or understand them without gathering people around them in movement.

For the first table I made, TENSION TABLE, the original design played with distribution of weight, tension, and body direction. This “score” was built into its design and display.  In the first session of the workshop we all shared a meal around the TENSION TABLE and then broke out into an open-ended movement improvisation around/in relation to it. As we gathered around the table we learned the importance of distribution of power, authority and agency as they pertain to the object.  The “tension” table generated a necessarily unequal distribution of responsibility in terms of keeping the group together.  Distribution of power and authority at the table was expressed through placement of peoples and  isolated individualist actions and was  changed deeply by absences of persons. The practice revealed a lot about how  authority and power dynamics are dictated through object-body relationships in the built environment. Ultimately, as the table went from an idle physical/visual object to a piece of “equipment” for our collective use,  it taught us things about itself as an object and ourselves as a group. This process has confirmed  for me many beliefs in the  important knowledge to be gained through tactility, touch, manual labor and gathering and is something I hope to continue into other projects.