Since I came to this country, flat and round copper angels have been following me around. I call them angel dimes; they have been my emotional support. I don’t remember exactly the first day that I had my first encounter with one of these beautiful pieces of copper. All I know is that every time I find one, it is always on the reverse side.

In the beginning, when I found one dime, I would just put it in my purse and spend it. I never paid close attention, until one day when I was miserable and found one. I remember it was winter, a cloudy and snowy day. I love snow, but that day was a very dark one for me. I had just gotten a call from Mexico; my sister-in-law informed me that my brother had been missing for a couple of days. I was terrified, I decided to go to church and meditate with God.

Just as I was going to step on the first stone to enter the church, I saw a ten-cent coin, facing down. I almost did not pick it up because I didn’t want to remove my gloves. But I managed to pick it up with my gloves on, and I remembered that I had been finding these types of coins for a long time. I noticed the symbols on the dime but didn’t spend time thinking about what they meant because I was so worried about what was going on with my brother. So I put the coin in my coat pocket.

The next day, I saw another dime on the floor at the Western Union office; it was face down too, and I thought it was weird that two days in a row I had found a dime on the reverse side. Still, l didn’t research the symbols on the back of the coin. I looked at it and saw the olive branch to the left, the torch in the middle, and the oak branch to the right. Since my mind was in another world with what was going on with my brother, I didn’t bother to investigate. One week later, another ten-cent coin manifested in the park. I was jogging and, suddenly, there it was, another dime on the tail side. At that point, I began my research to decipher what all these symbols were trying to tell me.

According to the U.S. Mint, the olive branch is a symbol of peace, the oak branch is a symbol of strength and independence, and the torch is a symbol of liberty. Also, some people say that dimes are a sign of communication from someone who has passed on, letting you know you are not alone. Others feel that finding dimes means someone or something is trying to get your attention. Also, it is said to be a symbol of friendship and reconciliation, cleansing, healing, light, victory, and richness.

When I learned about the meaning of these symbols, I immediately connected them with my brother’s situation. I realized that my angels were the dimes telling me to be strong, and whatever happened with my brother, I would never be alone. At that point, I didn’t know what had happened with my brother; the police were still searching for him. Six days later, I got another call from my sister-in-law. My brother had been found, and he had departed from this world. I strongly believe that my brother was trying so hard to get my attention to let me know that he wasn’t here anymore.

My angels, as I call them, manifest their presence in the most unexpected places and times. They are with me in my sorrows and happiness, when I am upset or relaxed. Even when I’ve traveled to another state, I have found a dime on the tail side. This confirms that my angels are with me everywhere I go.

I have been collecting and labeling them by date and life events. I keep them in my jewelry box on my dresser because they are my most precious pearls and gems. They have priceless value. The message has been the same always; I have found the coin on the tail side always. Not one time have I found it on its head side. It’s amazing how God sends you a constant message to let you know that he is holding your hand no matter what. 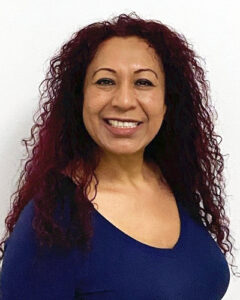 Born and raised in Mexico, Gabriela Robles came to the U.S. more than 10 years ago. She holds a B.A. from CUNY’s Baruch College and works as a graphic designer and corporate communication specialist. Her passions include learning something new every day, traveling, and volunteering. She also enjoys dancing, yoga, and meditation. She studies at University Settlement, where Lucian Leung is the director of the Adult Literacy Program.