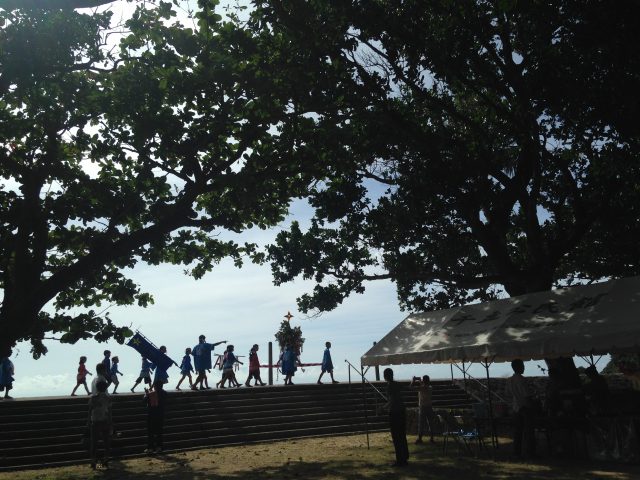 In this mid-August, Japan is still very hot.
Every summer, I experience summer becoming hotter and hotter because of the climate crisis. It was interesting that the southern islands seemed less warmer. Not only the actual temperatures are higher in Kyoto, Osaka, and Tokyo than Okinawa, but the green and the wind in the southern islands seem to calm down the heat. Novelist Yoko Owada writes in Kentoshi (The Emissary) about a world where human beings in Tokyo cannot survive unless their importing of foods from Okinawa. She further writes about the danger of going outside in cities due to contamination. This may become true…

As I wrote in my previous post, I want to write a little bit about my reason of studying the relationship between the natural world and arts/music. For me, nature is an important inspiration and the subject that I venerate. Because it was so natural for me to have the idea for a long time, I did not consider it to be special, but, since I moved to NY, I found the concept to be unique. While, in Japan, where idea that derukui wa utareru (The nail that sticks out gets hammered in, meaning you will be attacked if you are unique.) has prevailed, the idea to worship nature seems to coexist with the society and the environment. Even though my unique idea does not go by the idea of nature veneration of Shintoism, my idea has not brought any issue and it was easy for me to hold the idea in Japan. On the other hand, in NY where originality seems to be praised, it has been very difficult to hold onto my idea. First, New York City was created by construction. Second, the idea to worship what has been there in Manahatta (in Lenape language), changing little by little in the cycle of nature, since the ancient times, seems to contradict with the idea of constant development and going forward in the competitive society. The value under which the system of the society including credit scores, for example, is constructed contradicts with my idea of eco-system, and there has been a battle inside of me as I endeavor in the city. I needed to find a way to protect my idea of nature veneration and look at it closely in the rest of my days in NY in my artistic path. The ritual I observed in Iriomote Island, Yaeyama area, Okinawa, was called honensai, written as good harvest year festival. The event was held in each village from early July to the end of July. The ritual like this is described as saishi, written as festival worship, often in books and academic writings. Also, the ritual is described as kamigyoji by some writings and by people in the area. Kamigyoji is written as god event. Matsuri or omatsuri, written as festival, is often used in Okinawa or Yaeyama folk music too, which hold different meanings from matsuri in the main island of Japan. I decided to describe the event as “ritual” in English but I feel there should be another way. Even if I use a word, festival, the event should not be restricted in the meaning of “festival” in English speaking countries but matsuri, festival, in a broad sense specific in the area (and not specific in the main island of Japan).

Speaking about words, at butoh lessons, dancer Yoshito Ohno says there are many words to describe human body in Japanese: karada, written as emptiness using the example of kaguyahime, an old story in which a baby girl is born from a bamboo, karada or shintai, written as two characters describing bodies and contents, and nikutai, written as meat body. I can also add karada in katakana characters, and karada in hiragana characters.

I thought about my own artistic tool, voice or vocal (as in the musical category of instrument as in the English meaning), in many different ways to describe it in Japanese. There are at least five ways to describe voice for me now, and it may expand. In other words, there exist simplification and exclusion of meanings and concepts upon translating or describing a word in a different language. However, if we are to explain every meaning and concept of a word, it would be difficult to communicate.

I was thinking to write also about my yukata (summer version of kimono) wearing, communicating with my mother, and how I found it to be different from a nationalistic idea. But, I would like to leave it to another time and end this blog with my finding on wordings.

Thank you for reading.