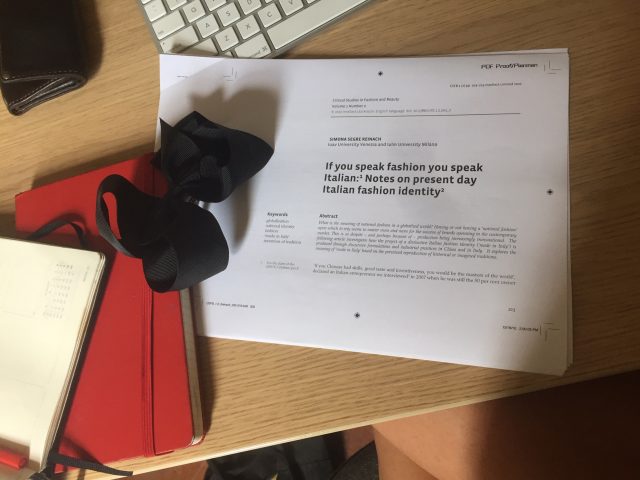 Well, a lot has happened (of course) since my last post way back when in June. But I suppose I will use this particular post to write about conversations I’ve had with scholars/professors in parallel fields who I have met with here in Italy, who have been looking into the relationship of Chinese and Italians past, present, and future. I met with Simona Segre Reinach, an Italian professor at University of Bologna, who works on fashion studies happening between China and Italy, with both Chinese migrants who came, and are still coming, to work in the fashion industry not only in Prato (as i recently found out) but around Venice and Padova. The work the Chinese are doing is ‘forward thinking’ in an industry sense, making futuristic tech fabrics and also using more modern technologies for manufacturing, and if one can see how that might contribute to helping the Italian fashion industry also move forward, Chinese migrant labor might be seen as having a positive impact here. Simultaneously, many Chinese from the mainland are now coming to Italy, to Milan and Florence, specifically, to study fashion. These students are part of the new generation of Chinese who have money to study abroad and the freedom to pursue their ‘passion’. In my conversation with Professor Reinach, she also remarked on the Italians going to China to work in fashion.

Having previously written on Italian brands that partner with Chinese businesses based in China, and on Romeo Gigli, the beloved Italian fashion designer who recently sold his company to a Chinese fashion conglomerate, Reinach mentioned that younger Italian designers are now following suit and going to China to be the ‘creative heads’ of existing Chinese brands. This led to a deeper conversation, and one related to the questions I am asking this summer, which include ‘who is inspiring who?’ since there is a lot of Oriental/Eastern influence in Italian aesthetics. I mentioned the title of this summer’s Pitti Filati show (the number one international trade show for textiles for the fashion industry, held every January and July), which was titled ‘Oriental Inspiration, Italian know-how.’ I thought this was an interesting concept, as it could be reversed to ‘Italian Inspiration, Oriental know-how’ in today’s fashion industry where Italians are seen as being the creative, aesthetic minds and the Chinese are seen as the laborers who know how to produce.

I also met with Patricia Lucrati, an art historian based in Florence who teaches a course on the history of Italian Fashion at La Pietra (NYU’s Florence site). Her interest was in Oriental influence in Italian fashion, occurring pre-Renaissance. We discussed the time in which Italy was trying to learn Oriental methods for making porcelain and also silk, which I mention in this blog post just as a reminder that Italian trade and migration with China is age old, and by looking through this particular case, we can see how it might be a microcosm for all trade and migration as a simply a natural, inevitable force of human nature, where anti-immigrant sentiments of today arise out of anxiety of dwindling resources in a changing world, where nationhood is fed in terms of populism. That said, I have also been thinking a lot about nationhood with the ‘Made in Italy’ tag and what it means, and how Italy used the fashion industry, when it started becoming an industry (around the same time Chinese started manufacturing in Italy) as a source of national pride.