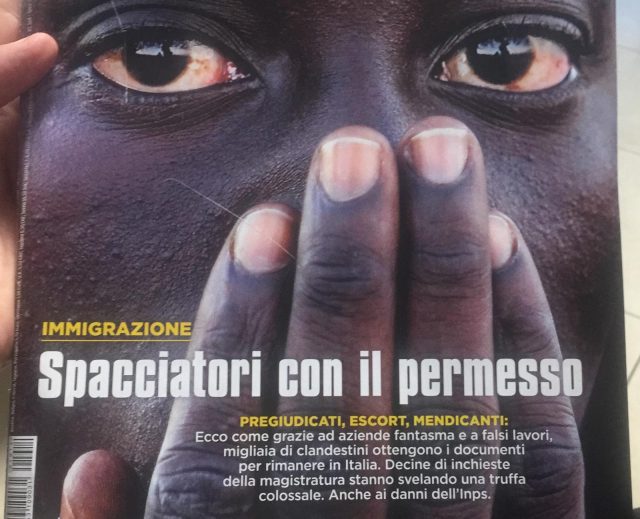 Headline:  “Immigration: Permission to be drug dealers. Repeat offenders, prostitutes, beggars: This is how, thanks to phantom companies and false jobs, illegal immigrants get documents to stay in Italy. Dozens of judicial inquiries are unveiling a colossal scam. Even a risk to our national Social Security Administration.”

Panorama is a premier weekly magazine, published by Italy’s largest publisher, with historical ties to Time-Life and to the financial empire of former Italian Prime Minister Silvio Berlusconi.

I have been a vagabond in Italy since attending The Immigration Conference a week ago in Bari, Italy. The conference is the largest of its kind and brings together researchers, academics, NGOs, policy makers, and politicians to consider the many and difficult issues related to human migration. Presenters and attendees were from many countries – with papers delivered in several languages – most notably English, Italian, and Turkish.

You may know that the current Italian government is trumpian in form, content, and bluster. The Vice Premier Matteo Salvini is a neo-Mussolini trumpster who is cultivating a cult of personality – calling himself “il capitano,” The Captain. Mussolini’s cult called him “the Duke.” To my knowledge our fearless leader in the US has yet to bestow upon himself a nomen eius imperio, but that may come in time.

Ministers from Salvini’s government were in attendance at the conference in Bari – there to defend Italy’s hard-line anti-immigration decrees. They made, over and over, the point that the Italian government exists to take care of the Italian populace – not to take care of “your tired, your poor, Your huddled masses yearning to breathe free, The wretched refuse of your teeming shore.” Questions from the unfriendly audiences suggested that it might be in the best interest of the Italian people if their government confronted and dealt with the reality and inevitability of world population instability. The current policies largely demonize the immigrants and submit them to increased perils by abandoning them in rural communities where they fall prey to organized crime. And, from the fascist playbook, whips up popular resentment of “The Other” along with adoration of the strong-man of the moment.

Last week I spent in Florence at the NYU Villa La Pietra – getting to know the place and people ahead of my fellowship which begins there in September. As was part of my summer research plan, I also made contact with the Italian refugee “reception center” at which I will work. My plan is to make a series of oral history recordings with refugees – looking for markers of hope and despair as they manifest in the continuing difficulties these people face in their quest for asylum.

This week – I’m actually a bit late this morning – I am in Genoa for a seminar on the sociology of immigration – organized by the University of Milan and a private research group called CSMedì. We are about 20 researchers – and about 20 presenters – a very good ratio for someone like myself who needs to absorb from both sides of the aisle. This is my first foray into an Italian-only academic environment. Yesterday was a challenge – we academics really do have our own dialects – and the abstruse forms seem designed to keep others (me for example) from understanding.

I have made several videos – which I had hoped to upload – but the blog site hasn’t cooperated. I’ll upload them to YouTube and send along the link.

Best greetings to you all.