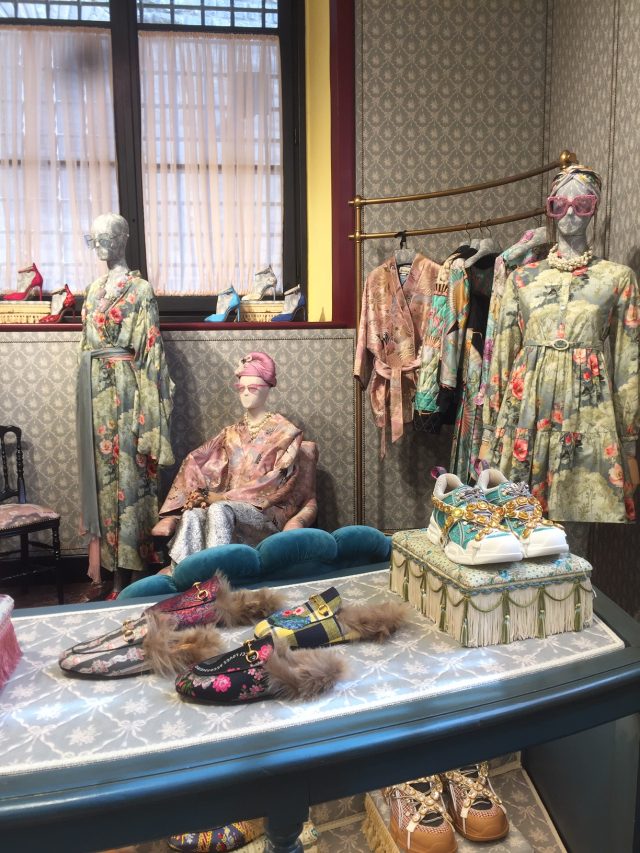 My study is centered around at understanding migration in the era of late capitalism through the lens of the Chinese migrant workers who work in Prato, Italy, self-proclaimed as home to the word’s largest textile industry with over 5,000 garment factories producing clothing for labels between fashion and luxury ‘high’ fashion. The majority of these factories are run by the Chinese diaspora who have been migrating to Italy since the 80’s. As China’s rise has finally caught world attention, this study intends to look at the wake of Mao’s Cultural Revolution in the west as his lost generation dispersed and migrated to find work unavailable in China, the communist road to capitalism, the term ‘neo-colonialism’ that has been applied to Chinese migration in Africa, Italy, and places of economic opportunity, and how migration affects the aesthetics of a changing global order, using material culture to isolate aspects of migration.

Last year while traveling in Italy I noticed a lot of “Made in Italy” pride that went on to inform my current research project. I later learned that most of the “Made in Italy” products were made by Chinese immigrants in Italy, leading me to question the stigma around the “Made in China” label. Even as I searched the internet for answers, ‘whistleblowers’ all appeared to making the same claims “Your designer bag is ‘Made in Italy’ *BUT* by Chinese people!” The very sentiment of the statement implied a stereotyped global perception of Chinese labor of fast and cheap.

Bangladeshi and Chinese migration in Florence and Prato (20 km away) is palpable. Bangladesh and China are countries that have supplied cheap fashion production for western brands for decades, consequently producing skilled, fast, hard-working sewers, so it’s no surprise that they have exported this kind of labor to other places in the world with thriving garment industries.

The Chinese (who are mostly from Wenzhou) in Prato wear Gucci, Armani, Burberry, and Chanel. It’s easy to tell because the items they choose are emblazoned with loud logos. They drive BMW, Mercedes, and Volkswagen SUV’s. Somehow the clothes are worn and the cars are driven as if they could be any other t-shirt or vehicle: there doesn’t seem to be an air of pride but rather as if these have become the normal aesthetic choices signifying success, as many Chinese have become owners of garment factories formerly run by Italians.

The Chinese in Prato have effectively kept themselves isolated from the Italian community and concurrently operate their businesses in ways outside of Italian law. Some claim they beat the Italians at their own mafioso game. These conflicts, however, raise larger questions. The Italian luxury brand Gucci produces the majority of its goods in Prato, in factories with Chinese working in sweatshop conditions, yet Gucci is also a partner to Centro Pecci, Prato’s contemporary art institution. Gucci also has a (somewhat ostentatious) museum in Florence which, when I went, seemed to frequented by newly rich Chinese people from China (not migrants) wearing Gucci.

These coincidences and contradictions beg for larger questions to be asked, questions where we cannot simply patronize Chinese labor conditions to fetishize the horror of the Chinese sweatshop in Italy, but rather to ask what these aesthetic cues tell us about the world as China rises in the shadow of an America that has been distracted with war. In moving forward, I ask, how does the material culture of Chinese in Italy in represent a global undercurrent? How does the desire for a modern look collide with the existing sensibility of a given locale and thus, what are the aesthetics of migration?