I was a little girl in a small village. I left my village and moved to the city for high school. I was accepted into a famous school in the city after I had passed the exam with good results. The first year, I studied in the afternoon. I was seated at the first row of tables to see everything better because I was small and nearsighted. I liked this seat.

One day, I was curious about who was sitting in this seat in the morning class. So I wrote a letter to the person sitting in the same seat. One Friday, I decided to put the letter inside the student’s desk. I was anxiously waiting for the following Monday; I wanted to know if someone received my letter and replied to it.

The following Monday, I went to school 15 minutes earlier than usual because I was nervous that my classmates would laugh at me if they saw and read my letter. I hoped someone had replied to my letter. And . . . I received a letter from a boy! He was two grades above mine. It was his final year at school. We sent letters to each other via the student desk. We shared details about hobbies, family, and future careers. He wanted to be a doctor so he could help many people. Sometimes I asked him to help me with my homework.

At the end of the school year, we decided to meet at a certain bench in school. That was a nice day. I went to the bench and saw a boy waiting for me. I was very anxious because it was the first time I saw him. 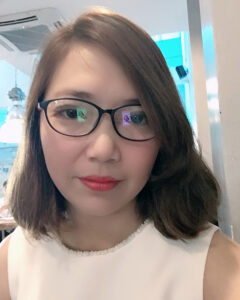 Thuy Minh Nguyen was born in Vietnam and moved to New York City in October 2020. She received a master’s in business administration at Can Tho University. She hopes she can speak English fluently soon because she wants to attend college in the U.S. She likes reading, walking, and traveling. At the New York Public Library’s Washington Heights branch, she studies English with Lead Instructor Elke Stappert. Sisnur Araujo is the hub manager.