“What would you like?” asked a barista in Dunkin’ Donuts when it was my husband’s turn to get his coffee.

“Large coffee with milk and two sugars, please,” replied my husband, Omar. When the lady went to make his coffee, however, he noticed a wallet on the counter. Looking toward the door, he saw that the man who had been in front of him was leaving.

“Excuse me, sir! You left your wallet!” shouted Omar, as he ran after the man, forgetting about his coffee. Outside, he caught up with the man, who was already getting into his car. “You left it on the counter in Dunkin’ Donuts. Here!” The man took the wallet, put his hand on his chest in a gesture of thankfulness, and said, “Thank you, my brother! God bless you! What would I do without it?”

“I know what it feels like to lose something precious,” replied Omar.

Fifteen years ago, Omar decided to move out of his native country, Jordan, to find a better life because after he graduated from high school, he couldn’t find a good job. He drove a cab and worked as a security guard. These jobs did not pay him enough money to support his family of 14, which had big debts. The jobs paid very little because of the bad economy in Jordan, and people could hardly earn enough money to pay for food and bills. That is why Omar tried to apply for a visa to the United States, Canada, Sweden, and Germany. Everywhere his application was rejected, but finally, he managed to get a visa to Sweden.

He arrived in Stockholm hoping to find a job and have an easier life, but all he could find were low-paid jobs. He delivered fruit and vegetables to supermarkets, sold strawberries in the summer, and worked as a cashier in a store. All the employers paid him very little because they knew that he was in the country illegally, since his visa had expired. He lived in a large apartment with 40 other people, most of whom did not have legal papers either. He had to stand in line for half an hour to go to the bathroom and could not take a shower for longer than one minute. Another difficult thing was very cold weather; there was a lot of snow, the days were short, and the temperature was always below zero Celsius. Coming from Jordan, where snow comes only twice a year, Omar was not used to such weather.

After he was finished with his job at the warehouse, Omar walked to the station to ride the train to go back home. One day, when he arrived at the station, he reached into his pocket to get his wallet to pay for the ticket, but he could not find it. His heart fell. Sweat covered his forehead, and he felt dizzy. All three thousand dollars he had earned was in his wallet. Because he lived in the country illegally, he could not open a bank account, nor could he leave the money at home because he lived with so many strangers.

The wallet must have fallen to the ground as he was walking to the station. To make things worse, it was snowing. He retraced his journey to look for the wallet but with snow covering the ground, he did not find it. Not only did he lose all his savings, but also his documents and his international license. For someone without papers, restoring all that did not seem possible. His only prospect was to be deported back home with nothing in his pockets. To get where he was staying by train, he returned to his work and borrowed a little money for the ticket from his employer.

He could not eat or sleep, thinking about how he could survive. The three thousand dollars buried somewhere under the snow was the money to pay for the rent, for food, and to send to Jordan to his family, who really counted on it. When my husband thought about all the extra hours of hard work without days off for the pay below minimum wage, he wanted to cry. But there were too many people around him who would see his tears.

The next day, when he went to work, he decided to walk on the same road to look for the wallet. As he was peering at the ground, brushing off the snow with his feet, a young lady came to him and asked him if he had lost something. My husband told her about how he lost his wallet. She asked him what his name was, and he said, “Omar.” Then the girl told him that yesterday, on her way back from classes, she found a wallet on the ground with his name on the ID. She said she had been going to take it to the police, and how lucky it was that she bumped into him. She gave my husband her address, inviting him to come for his wallet later, when she was done with school.

Omar could not believe it. He felt so happy that, as he continued to walk to work, he had to make sure his feet landed on the ground and that he was not flying. When he went to pick up the wallet, he tried to give the girl 20 percent of the money, but she refused and told him she knew how it felt to lose a precious thing.

After Omar waved goodbye to the man who had left his wallet in Dunkin’ Donuts, he realized he had just repeated the same words as the girl who saved him in Sweden: “I know what it feels like to lose something precious.” He added to himself, I know how it feels to find it, and smiled. 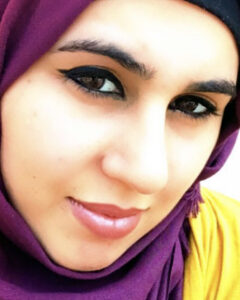 Khaola Smadi is 28 years old. She was born in the U.S. but raised in Jordan. “After my husband and I lived in Sweden for a few years, we moved to the U.S. in 2013. I have three children and am working as hard as I can to do well in everything.” She studies English at the College of Staten Island with her teacher, Polina Belimova.