I got my acupuncturist license in 2001. Twenty years ago. The same year 9/11 happened. This tragedy shocked the world. On the day it happened, I volunteered to join the Pacific Acupuncture College team of the Federal Emergency Rescue after work. I still recall the silence and deep sorrow on every rescuer’s face. Two days after 9/11, there were not enough treatment beds for therapy. The rescuers were so sore, tense, and stressed. Some of them had not rested for 48 hours. When they came to our therapy center, they just lay down on the floor directly. After a few minutes of treatment, they got up quickly and went back to rescue. They could not even get complete treatment and just took short breaks most of the time. We saw that they were exhausted, but they did not want to stop the rescue mission. We might not have known their names, but all of them were our heroes.

I remember a woman who seemed to be over 60 years old. When she came to our treatment room, she said, “I feel dizzy.” She was a cook for Federal Emergency. Her eyes were bloodshot. I asked her, “Do you have hypertension?” She answered, “Yes.” She had not rested for 24 hours. I told her, “Auntie, you cannot be like that. You always stay by the fire or stove and have hypertension, bloodshot eyes, and dizziness. You really need to be careful, to avoid getting a stroke.” She informed me that she was supposed to see her family doctor, but she was too busy providing food and meals. I gave her a therapy session. She said she felt better. Then she went back to the kitchen. She was a fighter who didn’t leave the battle. She was wearing a cook’s apron, not a uniform, but with her spatula in her hand, she was a hero in my heart.

Not only humans came to the rescue. When I was in the treatment room, a policewoman walked toward me with a big dog. I was scared of big dogs after once being chased by a big barking one. I thought the policewoman needed treatment. But it was her dog. He had worked for two days straight. He was moving very slowly and looked skinny and dirty. Eventually, he was lying on the floor. I overcame my fear and touched the dog’s back. I gave acupressure to his spine, hip and legs. His eyes were calm and docile, and he seemed to understand this immense tragedy. After 10 minutes, the policewoman said to him, “Let’s go.” The dog struggled to stand up. I cuddled him and helped him stand. I watched him walk out of the treatment center, walking without shoes on the smoking ruins. From that moment on, I was not scared of big dogs anymore. I adored him. He was doing what he could. And so was I. 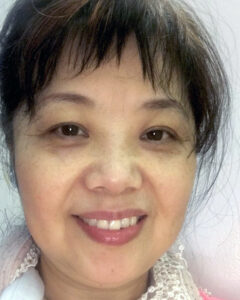 Su Sun was born in China. She graduated from medical college in China and arrived in New York in 1996. After getting her acupuncturist license in 2001, she worked in a rehabilitation center. She wants to improve her English to better serve and communicate with her patients. She likes taking English classes with Lead Instructor Elke Stappert at the New York Public Library’s Washington Heights branch. Su Sun often helps other students.