Before the rain came down, the appearance of a dark cloud changed my entire mood. There was a continuous flash of lightning, thunder, and heavy wind. It was around 6 p.m. when I took my shower. I sat on the veranda, waiting to see what was going to happen. Birds were busy flying across the sky until they found their nest to settle in. Squeaky sounds were coming from here and there until they disappeared. By then, I figured they fell asleep. Darkness began to take over the land. I watched until everything outside became invisible.

The rain started pouring harder, with the full force of wind behind it. I hoped for better through the night, without closing my eyes. My face was covered with fear, as I wished I had the power to torture the rain and turn its volume down. I could hear from inside all that was taking place outside.

Coconut and breadfruit fell from trees like thunder balls dropped from the sky. Roofs were torn off, and some landed a mile and a half from home, as if there was vexation between the two. The rattling of windows had me panicking, wishing I could disappear.

Maybe my nervous system was dismantled in that hour. Despite what was happening, I was hoping that the storm activities would continue into the next day, for me to stay home from work for at least one day. I fell asleep for a few minutes and woke up to a clear sky. It was morning.

First thing, I looked through the window at my neighbor’s house. Half of it was standing, and the other half was on the ground. My neighbor was sitting on his bike, looking in despair. He had lost part of what he worked all his life to achieve.

It started to rain for a second time. This time, there was flooding. Water and debris were coming from here and there. The elders had to evacuate from their homes through flood waters, which caused some to fall ill and seek medical attention while staying with relatives.

It took weeks before everyone returned to their normal lives. I am hoping that I will never have to experience another day or night like this. 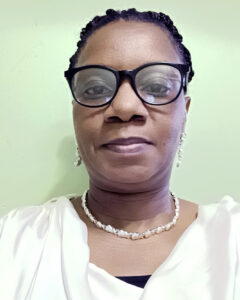 Sandra Allen was born and raised in Jamaica, West Indies, and currently studies at the Brooklyn Public Library’s Eastern Parkway Adult Learning Center. She developed a passion for writing through reading books and newspapers. Her story “Bank Robbery” was published in LR19. She always has a positive influence on the people around her. Sandra Allen’s tutor is Kenneth Swaby, and the site manager is Donna Alleyne.