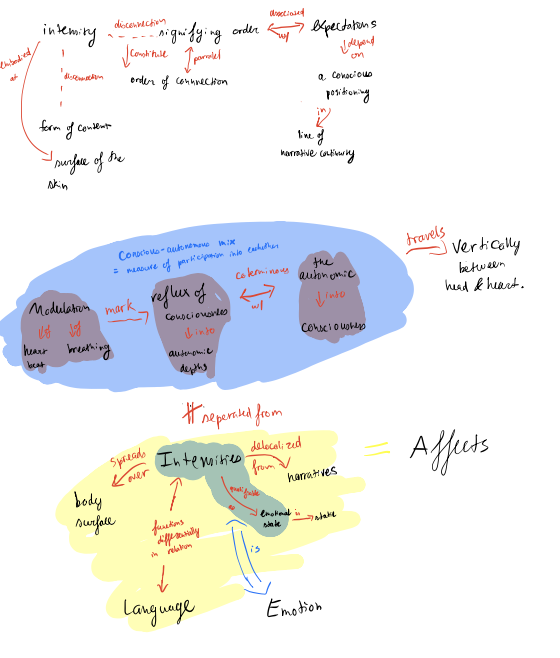 Since the last blog post, I have been diving deep into the rabbit hole of Deleuze-influenced literature in order to make sense of what Deleuze was saying and also seeing how others have used his theoretical frameworks in their research. As a result, I got sucked into a black hole of theory and I desperately need to touch grass.

My motivation for diving into Deleuzean studies was to have a better grasp of the terminology that’s used in his methodology. However, the multitude of writers on Deleuze have employed his concepts in varying ways, and much to my frustration, they all seem to differ from each other.

I decided to pick Brian Massumi as an interpreter of Deleuze since he writes on perception, images and social media. Instead of trying to understand what the terms that Deleuze uses, I shifted my focus to understanding what they do. In doing so, I used concept maps to better illustrate how different ideas are in relation with each other.

With this theoretical framework to work within, I now plan on writing about and discussing how a digital identity is constituted from images (such as in the case of social media). I will contrast this approach against other approaches that explain the distinction between digital identity and the self, namely Guy Debord’s and Jean Baudrillard. Both thinkers, and most people, would agree that there’s an inherent distinction between the self and a digital identity. Where this agreement usually ends, however, is a question of how different these two entities are (the self as opposed to a digital identity). Guy Debord’s claim is that our self is mediated by what he dubs “The Spectacle” while Baudrillard’s claim is that our postmodern condition is described by how identities are constructed by the appropriation of images. Both of these thinkers describe the distinction between self-identity and digital-identity as a given; both of them imply the existence of a subject whose Being can be thought of independently outside of images. As a result, both offer a cure to our post-modern society in the form of Rousseauan-return to the Noble Savage.

While I agree that our society is dominated by images, I think their analysis of how images shape subjectivity, is lacking. While both thinkers define this phenomenon as symptomatic of a post-modern society but neither of them go deeper in understanding how images shape self-identity. Their ethical projects, implicative of their philosophical project, advocates for a rejection of an image-based identity. It’s impossible however, given the necessity of digital identity in our everyday lives, to escape the regime of images. Thus, I hope to build upon the works of Brian Massumi, who was influenced heavily by Deleuze, to envision a better way to navigate our digital age.