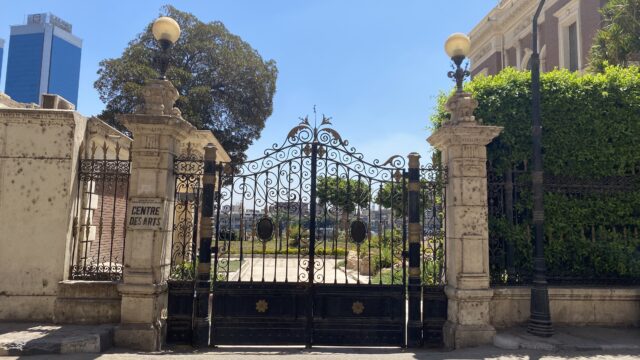 It was by no means unheard of to me that proximity to European intellectual tradition is the metric by which Egyptian cultural production is qualified as valuable. However, never having experienced this in the academic realm, only in social spheres, I was unsurprised but still troubled to see the extent to which Western mimesis governed even brick and mortar collections of academic discourse, aside from the far more easily penetrable oral discourse.

In visiting libraries and archives, many reflect— if not a site preserved from its colonial genesis— an imagined monument to the Europe it wishes to emulate, even without having been established during colonial rule.

On my way to a different library, I passed the Centre Des Arts and the Aisha Fahmy Palace, located in my mom’s childhood neighborhood. When I googled “Aisha Fahmy” to read more about the palace and to find out its hours of operation, the majority of the articles that appeared in the search results were written in French or English (mostly pieces written in French for Al Ahram Hebdo) . The puzzling part: I typed into Google “Aisha Fahmy” in Arabic. This went to show, in Egypt, art and culture are to be written on in Euro languages.

Perhaps the most outrageous part is the focus on European language and scholarship to authorize even postcolonial and decolonial literature and in the archives and libraries.

(Yet, I’ve been struggling with this; because as I have been recognizing this as an issue and reiterating its need for acknowledgment and remedy, I have heavily been engaging with scholarship and citing texts written in English or translated from Arabic. Then again, this is the very phenomenon which I’m researching…?)