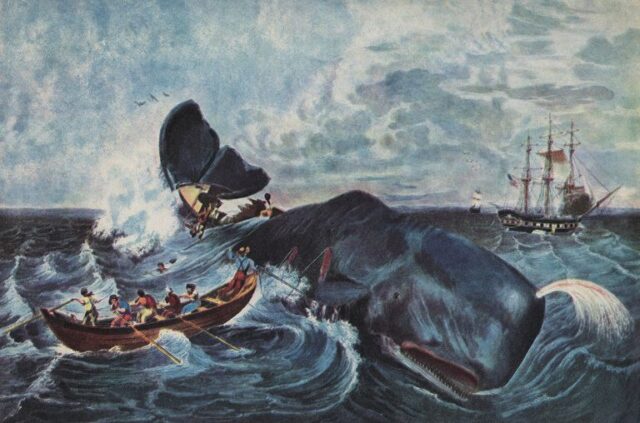 Last week, I traveled to Massachusetts to begin researching the history of whaling in America. For the past week and a half, I have spent my days at the New Bedford Whaling Library, reading various whaling accounts from the 1800s, original logbooks and journals of American whalers, early scientific publications on cetacean research, International Whaling Commission (IWC) reports from 1946 to 2010, original flyers and newspaper articles from the 1970s environmentalist movement, and late 20th century literature on the cultural, economic, and political debates between pro- and anti-whaling advocates. I have also had the chance to analyze early illustrations of whaling scenes, scrimshaw (engraved whale bone, often sperm whale teeth), and photography depicting the colossal factory ship whale hunt of the early to mid-1900s. Below, I highlight some of my favorite sources and most fascinating discoveries while exploring the collection in New Bedford.

One of my first sources was Edmund Gardner’s logbook, recorded on the Winslow of New Bedford from July 1815-June 1817. Here, Gardner describes a sperm whale attack: “At the moment of my delivering my harpoon the fish instantaneously stopped, threw his jaw over my head and threw me backward.” Gardner escaped with a severely wounded head and a broken hand, among other injuries. Tales like Gardner’s contributed to the mythos of the whale and the romanticization of the whaling voyage in the early 1800s.

This led me to my next discovery: the role of mystery in the whale’s shifting symbol. In early encounters between humans and whales, rarely did people view the entirety of a living, swimming, breaching, feeding whale. As Elizabeth Ingalls writes, “to view them, swimming on the water’s surface, as the whalemen did, is not to view the complete animal, and to view stranded specimens is to see them out of their natural element, deformed, bloated, and often decomposed.” For America’s early whalers like Edmund Gardner, there was still something mysterious about the living whale—something mythical and monstrous—because some part of the creature was always invisible. It wasn’t until the industry started pulling whale bodies out of the ocean on a mass scale and mutilating them that mythicality was almost entirely replaced by objectification and commodification. The menacing, mysterious aura was destroyed and replaced with thing-ness, with barrels of oil and spermaceti. The industrialization of whaling hastened the whale’s symbolical demise to mere commodity. Diagrams of “cutting-in” by Charles Melville Scammon, a whaler and natural historian who sailed in the mid-1800s (at least thirty years after Gardner’s encounter) are a case in point.

The commodity view appeared to hold fast through the initiation of the International Whaling Commission in 1946. Even though the Commission was concerned with conserving whale populations and introducing whaling restrictions, its approach initially was to “[recognize] that the whale stocks are susceptible of natural increases if whaling is properly regulated, and that increases in the size of whale stocks will permit increases in the number of whales which may be captured without endangering these natural resources” (ICRW, 1946). The early years of the IWC therefore consisted in debates among a group of whaling nations figuring out how best to whale—how they could sustainably reproduce and secure their products. What changed?

In short, the “Save the Whales” Campaign of the 1970s was pivotal. The rise of environmentalist movements and activism meant new voices were entering the whaling debate. This, I’ve come to believe, is when the whale earned its special symbol as the intelligent, gentle, magnificent mammal many of us know today. The “Save the Whales” boom of the 70s synthesized new research on cetaceans—their intelligence, emotional complexity, intricate linguistic patterns—with the threat of extinction and our emotional capacity to empathize with anthropomorphized creatures. In a 1990 article for the Institute of Cetacean Research, Prof. Milton Freeman argues that environmentalist organizations used the symbol of the whale to their benefit; “the more mysterious or mythic the animal can be made to appear, the more interest its name or appearance generates.” So, the “Save the Whales” campaign, much like the whalers of the 1800s, constructed its own mythical symbol. It had to re-mystify the whale, make it magically mysterious and awe-inspiring again.

My time researching the material and intellectual histories surrounding whaling in America has reinforced my belief that the whale can tell us a lot about our own thinking in the past 200 years. It has led me to question deeply my affinity for anti-whaling arguments. Is the anti-whaling position just a new form of speciesist thought comfortably cradled by a romantic mythos?