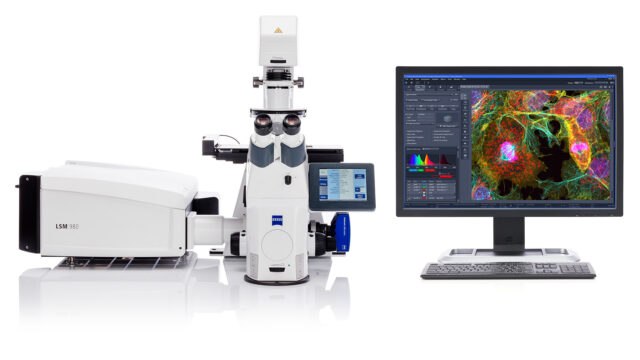 After spending eight weeks in the lab working on my experiments, I am now entering the final stage of my research project. This last month of my research often felt slow, due to challenges with the experiments, catching a poorly-timed summer flu, and lacking the right personnel to operate the equipment needed. However, I am ending my time at the Carlton lab with better refined protocols for both experiments (western blot and IFA), which provided important data that can be built upon by future researchers, along with a significant experience to carry with me and a greater sense of self as a scientist.

Since I focused my last blog post on the western blot protocols, it feels relevant to first recap my progress since my last update. After my initial success refining the assay for our control protein, actin, I encountered a string of inexplicable failures, even when repeating the exact same conditions. I was comforted that this is not abnormal with finicky western blots, but it was surely frustrating at times to repeat the same experiment that had worked so well before with no success. However, to my delight, on my second to last day in the lab, the experiment worked once more, and the likely cause of the issue – a one volt change in transfer conditions – was identified as the likely culprit. Moreover, not only did this original experiment work, but I was able to build upon this success in another blot using different actin antibodies, ones produced in a different organism, which would later enable the lab to use a dual color western blot. That is to say, a western blot which is able to combine two different colors in the same blot in order to represent an internal control and target protein in each lane (see example below).

When I started this summer, the western blot experiment was not working at all for either our control protein or our target protein. Now, at the end of this project, we were able to successfully identify our target protein with both old antibodies and new antibodies which will allow for a dual color blot in the future. While this was a repetitive and sometimes mystifying process, the tangible progress was certainly a fulfilling aspect of my project.

Immunofluorescence, the other experiment I worked on this summer, is a useful assay to visualize proteins in the cell. Through a series of incubation and washing steps, this common assay allows researchers to fluorescently label a protein of interest using antibodies, and then take pictures of the cell. This can help determine where a protein resides in the cell, which might inform more about how a protein functions. In this case, uncovering the sub-localization of the argonaute protein in T. vaginalis may indicate whether this protein functions by pre-transcriptional (if it’s in the nucleus) or post-transcriptional (if it’s in the cytoplasm) gene silencing.

While I spent the majority of my time on western blots, I was also able to refine the existing IFA protocol with success for our control protein, actin. Unfortunately the equipment used to image the cells, a confocal microscope, is extremely complicated to operate (see image to right). While I was able to be trained on this equipment, a more experienced expert on the confocal microscope happened to be away during the majority of my project. As such, further IFA experiments performed on the protein of interest, argonaute, will be performed in the near future.

Overall, it was a wonderful experience to be in the lab full-time this summer. While the work of my project is not finished, I am happy to have gained training on new protocols, better insight on being a researcher, and to have contributed to an ongoing body of research on an important parasite.