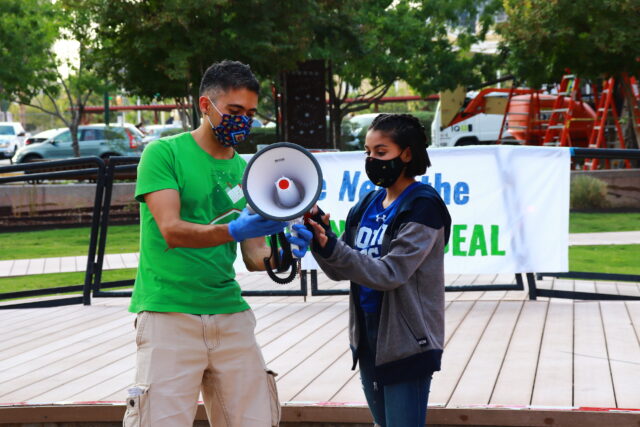 What motivates activists to donate so much time and so many resources to a common cause? Where does the passion for protecting El Paso come from? What makes border climate activists different from any other organizer? These are the questions I’ve been attempting to answer via theories of identity and subjectivity, and a theme I will continue to explore after this summer.

The historically turbulent context of El Paso’s transborder population has crucially informed the way in which its activists understand and “strategically shape their position as…subjects and citizens” (Overmyer-Velazquez). Throughout the ages, El Paso has been many things: a Native trading route, a Spanish outpost, a border town, a company town, an American town, a Mexican town. Similarly, El Pasoans have been many things: white, brown, transfronterizxs, mestizxs, Chicanxs, Indigenous etc. The border offers “multiple mirrors from which to view” ourselves. Identity thus dialectically arises from various (often conflicting) forms of subjectivity and classification, and is formed, unformed, and reformed through the signification process (Vila).

I contend that the unique socio political struggles of the border have served as sites where the signification process is realized. Following theories that tie semiotics with history, we may view the border and its inhabitants as symbols and subjects in historical narratives. The stories activists tell themselves about their own identity are connected to the semiotic value of the border’s history. The audience to which the stories of El Paso’s racialized social justice struggles are told identify a moral binary (good guys vs. bad guys) with which to relate. Sunrise El Paso’s activists have classified themselves as Othered from (and by) antagonistic political actors through this process during our encounters with Newman 6’s advocates. We’ve cast ourselves in a role narrated to us historically: the symbolic role of the El Pasoan resistor. The historical disenfranchisement of communities in El Paso has yielded a fierce protection of local agency tied to regional identity. Pablo Vila best relates the importance of historical narrative to identity;

Stories are perhaps unnecessary to explain why I use the category “table” to describe a square piece of wood supported by four “legs” But surely a personal story is very helpful if I want to explain why I think that ‘Fronterizos are being Americanized’ that ‘Anglos are materialistic and lack spirituality,’ that ‘Mexicans come to the United States to take advantage of welfare.’”

Through historical narrative, we inherited the cultural markers that border actors have used to identify political antagonists and allies in the past. Though we did not actively participate in El Paso’s historical struggles, the lineage of the controversy we are engaged in can be traced back to then, so the stories become personal through our relation to the place and its history. Because the dispossession of the border has been produced and reproduced, activists take on the mantle of defending local agency because their identity is entangled in it. The story of Newman 6, now enshrined in El Paso’s historical memory, thus serves as a point of departure for identity construction. Every political action we took was a site of meaning-making for the organizer.

In my own involvement with movement work, I intend to further interrogate how and why we resist the way we do.