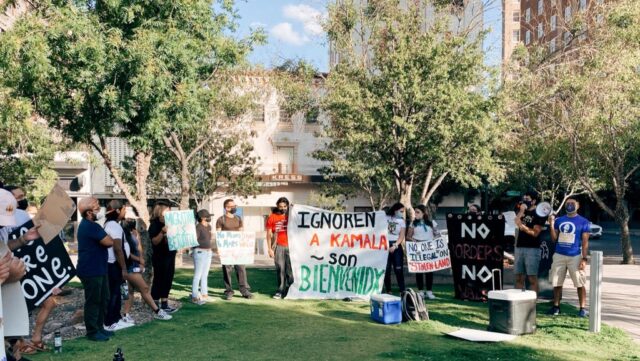 This summer, I have been traveling a great deal catching up with family, learning about the world. I am always ‘out of town’ relative to the town that I am out of. This month however, I was able to spend a few weeks at home, catching up with the Sunrise El Paso climate justice team who welcomed me home with open arms and a mountain of notes to catch up on. Immediately upon returning, I was able to attend a rapid response rally in response to Vice President Kamala Harris’s visit to the border. To the ire of loyal local Democrats, the rally was not meant to be a show of support. Rather, it was an exercise in migrant solidarity and a reaffirmation of the group’s commitment against the root causes of migration: violent destabilization of countries, vestiges of colonialism, legacies of capital extraction.

Only a week prior, Harris had been in Guatemala telling prospective migrants to “not come.” For Sunrise’s majority immigrant cohort, this rhetoric was indistinguishable from Trump’s talking points. One Sunriser wrote in an op-ed prior to the rally: “The undercurrent of the rhetoric is essentially a concession to Republicans and their constant demands to move everything to the right. Harris’ job here is to send the message: nothing has fundamentally changed, no matter how many stories you hear that we have relaxed or made our border detention policies any more humane.”

Within 24 hours of hearing about the visit, the activists had organized a rally downtown, complete with speeches, a marching route, and flyers. Among topics covered by Sunrise speakers were the connections between immigration and climate change, capitalism and immigration, the border and identity. Most moving to me were the personal testimonies of organizer’s experiences as immigrants or children of immigrants. We told stories of our parents coming to the U.S., we talked about our struggles with languages, we shared poems. One Sunriser spent over 10 minutes listing countries that had suffered instances of U.S. military intervention. We all listened intently for our home countries to be named. Mine was spoken around minute 6: “Nicaragua, 1979 to present.” Another dedicated a poem to the group, after folks had pitched in to replace his lost DACA card. A student, there to report on the event for his university’s paper, took the microphone and revealed that he was undocumented and tired of living with the fear of deportation.

We made our way to the ICE holding center as a group, chanting the entire way and trying to ignore the cop cars stalking us. Once we arrived outside the doors of the massive grey building, we mustered every ounce of lung power we had to chant messages of solidarity towards our “siblings locked inside.” So that they would know that they were not alone. So that they would know that they were not forgotten and that they would not be left behind. Shortly before we left, we noticed a white van approaching us. From it, an agent led out two detainees in shackles into the facility. They looked no different than our own parents, aunts, cousins, friends.

My time at home wrapped up with similar events, meetings, and conversations. In a way, my project this summer is a love letter to Sunrise and my hometown. I’m eternally grateful for their camaraderie and the knowledge they impart upon me every day. I consider myself lucky to have been raised on this land.