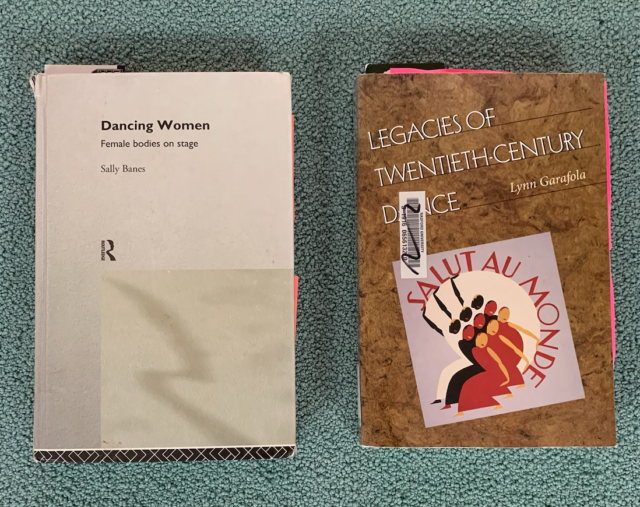 I am in a messy place with my research. As I am continuing to read and watch and search, I am following various threads of research and seeing where they take me. Here are some of those threads:

A study of film footage from either 1938 or 1950/51 of Variations on Euclid (1933), a piece in which Page explored modernism and abstraction in choreography, costuming, and scenery and prop design, prompted me to dive into historical newspaper records from the year 1933 to better understand what Page was involved with (at least publicly) at the time and the socio-political and cultural context in which she was embedded. I sifted through about 80 newspaper articles and advertisements from 1933 that mentioned Page, mostly from the New York Times, the Chicago Daily Tribune, and the Los Angeles Times, and also from The Chicago Defender, The Christian Science Monitor, and The Hartford Courant. The topics covered in these pieces range from a pre-fabricated house that Page’s husband’s brother designed for her on the north shore of Chicago and that was featured in a Philip Johnson-organized exhibition at MoMA, to shows that Page participated in at the Auditorium Theatre organized by the Chicago Friends of Music and timed to the Century of Progress world’s fair in Chicago, to the New York solo show that Page produced at the John Golden Theatre on January 29, 1933. Engaging with these archival primary sources was exciting, and I’m confident there’s more to be found from digging into newspaper records.

I am becoming further interested in the cultural history of Chicago in the late 19th through early 20th centuries — a period of broad social, artistic, and cultural revitalization in the city. This era was marked by a Black Chicago renaissance in particular, and this topic has received growing scholarly attention in recent years. A book on Chicago’s Black renaissance published this spring includes a chapter on a Black dance teacher here in Chicago during this time, Hazel Thompson Davis, who was credited in one Chicago Defender article as having “present[ed] the beautiful girls for the Ruth Page ballet at the Auditorium.” Based on context clues, I am intuiting that the ballet to which the article’s author, Nahum Daniel Brascher, refers is Page’s racially integrated ballet La Guiablesse (1933). I intend to continue to investigate how the histories of race and dance in Chicago intersected.

Another topic about which I have been reading and thinking is the influence of Diaghilev’s Ballets Russes on American ballet and on Page in particular. The company, which existed from 1909 to 1929, changed the course of ballet in Europe and subsequently America. Page, who was the sole American to dance for the company, was influenced directly and profoundly by the Ballets Russes and the productions that Diaghilev put together for it. Scholar Lynn Garafola, who has written much of the literature on the Ballets Russes, has revealed Diaghilev’s dedication to artistic collaboration in his productions. Page too cared deeply about and had a good eye for artistic collaborators. I am curious to further explore the scope and qualities of Diaghilev’s influence on Page, and to consider if she shaped her own career and work, in part, in his image.

As I’ve spent the past month and a half or so researching Page’s life and career and also the socio-political and cultural contexts in which she was entrenched and to which she reacted, I’m also attempting to synthesize what I’m finding and consider my big questions about her: How did she contribute to the development of ballet in America between the 1920s and 1940s? Why does she, and why does her career, matter?

Here are some potential answers to these questions: