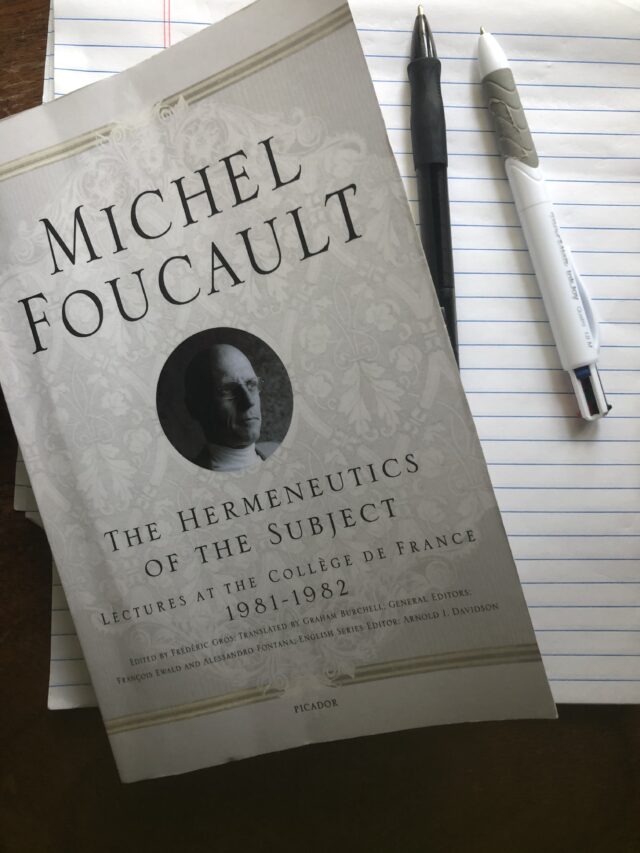 In this next chapter of my research I have been studying Foucault’s writings on the care of the self, which he refers to in reference to the Ancient reek precept epimeleia heautou. In the past few weeks I have been looking to Foucault’s own changes in direction in his work over the course of his life, from a focus on madness, to power and punishment, to Ancient Greek culture and the self. This movement in the themes and focus of his scholarship I take to be a great example of how to meditate on my own work and what canonicity means in relation to my work.

Though many scholars I have spoken to have jokingly laughed that Foucault often went beyond the scope of his expertise in his work- for example, some of his writings on classics were not “accurate”- I think it is a great lesson for interdisciplinary scholars like myself to escape out of the bounds of one’s own focus and to study broadly. Arguably, Foucault didn’t inaccurately study Classics, but studied them in a new way, not as a Classics scholar but as a thinker with aims to consider the relationship between subjectivity and truth in a modern age. As Foucault explains in one of his later interviews, we have to think about how to use knowledge and power strategically; he asks, “what can be played?” (Ethics, 140).

An exciting moment for me this month was finding a later interview with Foucault in the collection, Politics, Philosophy, Culture: Interviews and Other Writings, 1977-1984. I have included a picture of this interview below. What I found so crucial for my own research and Gallatin thesis development was Foucault’s reflection on how to use the canon of philosophy by getting outside of it. How do we allow scholarship to continue to grow and develop? His answer: look to literature, get outside of the philosophy canon to go back to it with new perspectives and ideas. I already had been excited at the prospect of using sources in literary criticism for ideas about how to connect Foucauldian cares of self to anti-racist work. My next chapter of my research will follow this lead with Foucault’s reflection of canonicity as inspiration.