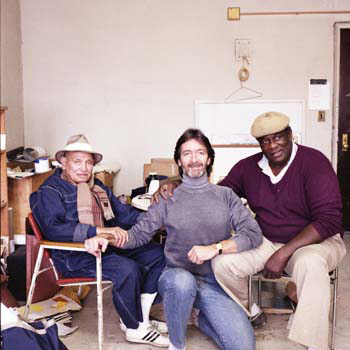 From reading journals from the last years of Bearden’s life, it becomes very clear to me that his main focus was not his health, or his personal relationships, but rather his artwork. According to the journals, Bearden spent the last few years of his life in and out of the hospital receiving treatments for his cancer. During the times when he was home, he worked with his assistant, Andre Thibault (Bearden and co. referred to him as Teabo) to work and build his skill with collage to the highest level he could achieve. It is in this last part of his life that Bearden truly mastered collage. His lines are seamless, the paper combines with each other to create images that match the style of Bearden –always geometrical, usually focused on the body, specifically the body of black women ­–but to a level of unmatched quality.

All of Bearden’s energy late in his life must have been dedicated to reaching this peak mastery. So, then, all of the other stresses of living ­–cooking, driving, planning medical appointments –was left to his friend Russell Goings. Russell took on the charge of taking care of Bearden, performing duties such as driving him to the doctor, performing physical therapy, and making him breakfast. He supported Bearden as his was making some of his final masterpieces, and that is admirable in many ways.

Russell has the last two known pieces to be completed by Bearden. One is named “To Russ” and is a portrait Bearden made of Russell. I think to myself about the role of the supporter –every artist in Bearden’s time from de Kooning to Pollack had a person who took care of their lives while the artists took care of their work. What is often said of those supporters, especially once the artist is gone? Russ calls himself the caretaker, he now looks over all the work that Bearden left behind. But after consuming years of your life to the needs of one individual, how do you then reckon with life without that person? How do you find your purpose?