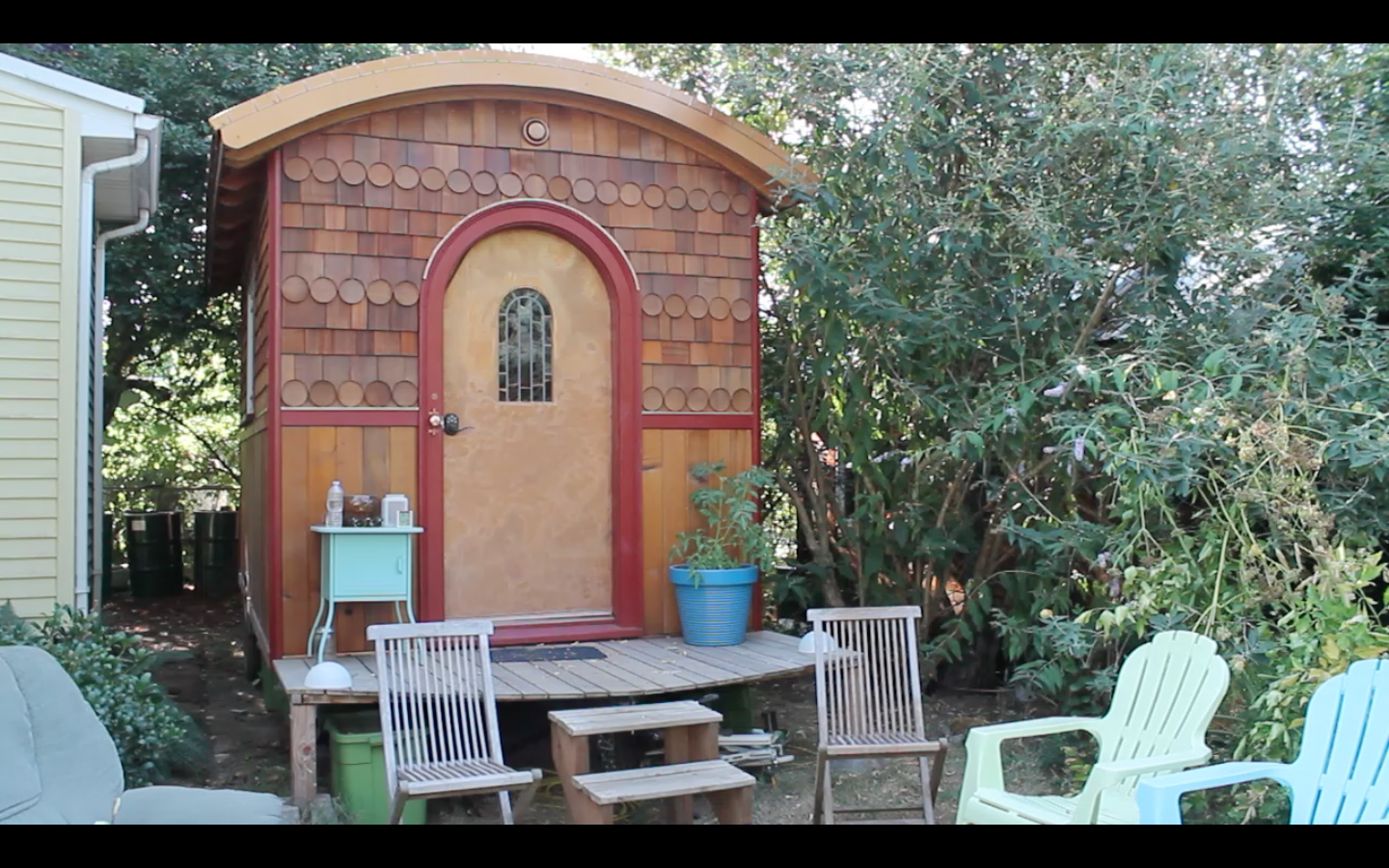 Luna, my research partner, and I arrived in Portland in the last days of July. It was 104 degrees F, unseasonably hot! Taking shelter in the cool Carioca Café we settled down with iced coffees and I flipped open my computer to take advantage of the Wi-Fi. The woman sitting next to me perked up when she caught a glimpse of the Tiny House website I had left open in my browser.

“Are you interested in Tiny Houses?” She asked, knowingly.

“You know, I live in one — have you heard of that new documentary Small is Beautiful …”

Her name was Karin and the next day Luna and I visited her Tiny House community, which was aptly named Simply Home. Karin and her “landies” (their special term for land-mates, like roomies) live on a typical plot in a residential neighborhood in Portland proper. Street facing they have a larger house that came with the property, but the backyard holds four Tiny secrets. Tucked behind the main house and nestled among garden beds lush with summer squash are four unique, homegrown Tiny Houses.

Karin explained to us that she and her landies shared the big house. Their community is small but diverse ranging from 22 years old to well into the silver years and from various walks of life. Each Tiny House was different as well, some more self-sufficient than others. While we were interviewing Karin in the big house a lanky blond guy, named Jake, tiptoed through the living room to take a shower that his Tiny House couldn’t offer him. Their garden was brimming with edibles and their hand built bike shed boasted a full rack of bikes. Karin and the Jake welcomed us wholeheartedly but with an excited air of secrecy. They were adamant about keeping their exact address private.

This was a very different Tiny House community compared to OM Village in Madison. Simply Home residents were neither homeless nor even struggling it seemed. The choice to live Tiny had been conscious and voluntary. They had built this community from scratch together and they were the first to admit that it was a work in progress. They were not publicly oriented and actively tried to avoid too much media attention. However, their sense of community and their connection to each other, their neighborhood, and Portland in general was palpable.

We casually spoke about urban density resource allocation. The residents of Simply Home community could easily have been spread out across 5 or 6 conventional homes, but instead were happily living on a single plot. They shared amenities like the kitchen and the shower, but their individuality also flourished. We learned that Karin was chiefly responsible and very proud of the garden. They also participated in forms of symbolic community building, for example once a week one person would cook dinner for the whole community. What struck me most however was that they were constantly participating in the social dance of simple cohabitation. It is rare to find a multigenerational, non-familial, group of people cooperating like that on a daily basis. It felt like a village.

As we left, munching on homemade pickles gifted to us by a grinning Jake, Luna and I wondered what would happen if he had kids! Would that upset Simply Home’s delicate balance? Maybe it would have to grow a little? I for one was completely enthralled by the place and I hope it will eventually be regarded as one of the successful precedents that could bring this form of community into the mainstream.

This might be my last post, but the adventure continues as we make our way south and eventually east. See you all back in N.Y.C.

2 thoughts on “The Other Tiny House People”