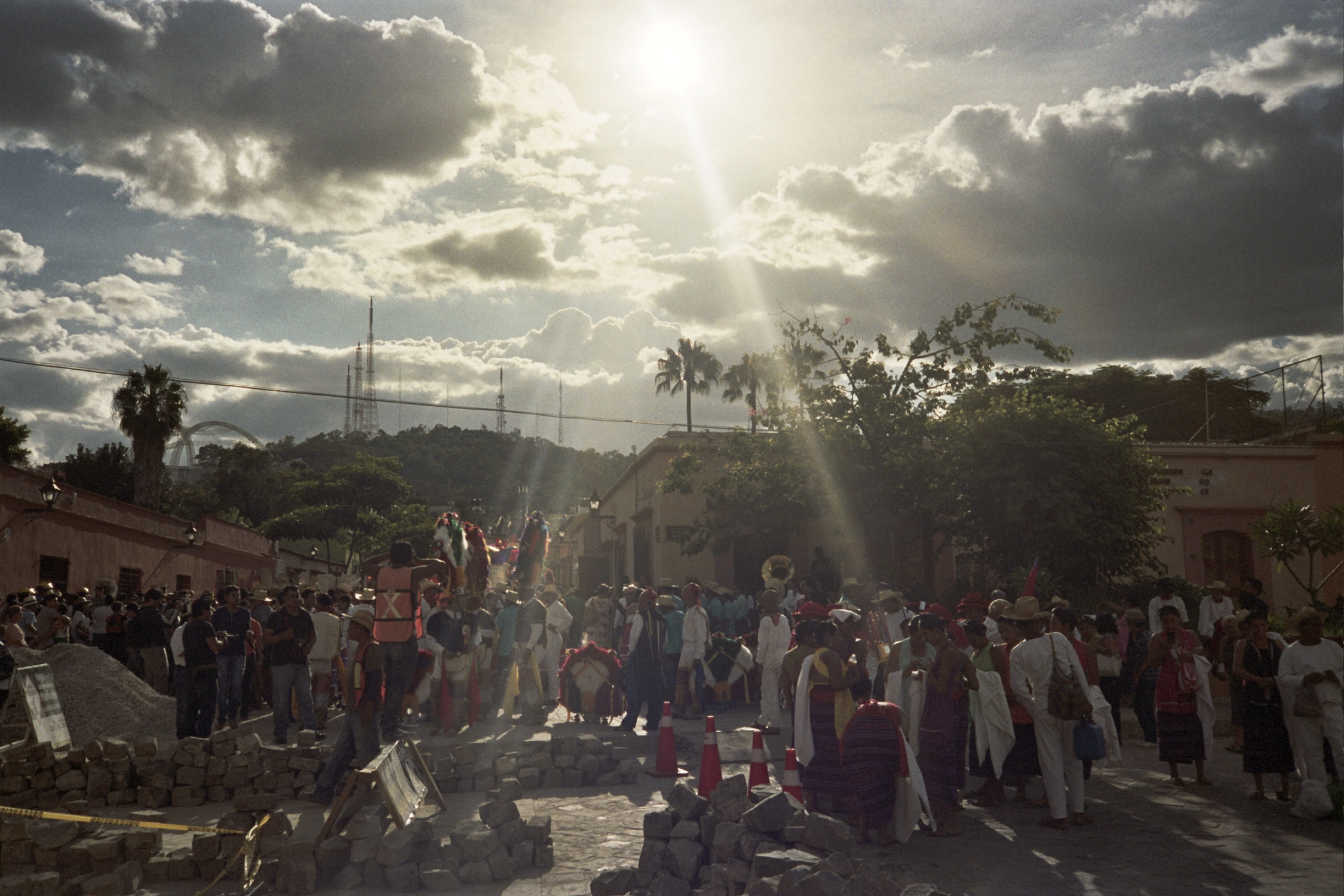 Hi there, this is Kitania and I apologize for the late post but I wanted to include some of my developed film and hadn’t gotten it back yet! I’ve been back from Oaxaca for about a week now, and I have to say I miss a lot about it, including the coffee, the tacos, the market, the mezcal… I miss speaking Spanish everyday. I miss how fresh and new the whole city feels after it rains each afternoon. I miss the little chihuahua Yoko who lived at the house where I stayed and always came by in the evenings to scratch at the door and get some pets. I miss a six pack of Modelo for 75 pesos – that’s 5 bucks! I am happy to use this time now, however, to make sense of everything I experienced in Oaxaca. The paradoxical aspects of Oaxaca is what brought me there in the first place and although my understanding of Oaxaca’s politics has deepened, my understanding has also been complicated. In going down there, I was hoping for this but in no way do I feel like now I understand Oaxaca.

First, a quick recap, as this post will discuss the events of 2006 and what I witnessed in Oaxaca in connection with those events. In 2006 a social movement took form in Oaxaca surrounding teachers who were continuing their annual practice of occupying the main square – El Zócalo – to make educational funding demands of the governor. In the past, demands had always been granted after less than two weeks or so, but this time the teachers remained and the federal police were brought in. The federal police fired on the unarmed teachers on June 14th and many were injured. In response, The Popular Assembly of the Peoples of Oaxaca (APPO) was born and their first demand from El Zócalo was the resignation of the then governor of Oaxaca, Ruiz Ortiz. A standoff followed as Ortiz refused to step down and even more federal police arrived which led to more instances of violent conflict. After seven months, Ortiz was still in power, the teachers were going home, and the city of Oaxaca had just been through a conflict that had shaken its spirit to its very core. Businesses had failed as many Oaxacans were too afraid to leave the house. Tourism had dwindled down to just about zero, which was especially difficult as tourism is the only economic sector that is growing in Oaxaca.

As it happened to happen, the teachers were still occupying El Zócalo when I was there and I ended up expanding my knowledge and understanding of the situation by speaking to people there about them. Here are some things I learned. Pretty much everyone I met had an opinion on the teachers, though the overwhelming one seemed to be something along the lines of, “I understand why they’re there, but it is really annoying when they protest and block traffic.” Many were far more sympathetic and many were far less. They were protesting nationwide education reforms that were being enacted by the President, Enrique Pena Nieto. The teachers union in Oaxaca, Section 22, is very strong. Since before 2006, Section 22 was in charge of enrollment, distribution, pay, and everything having to do with public teaching in the state. They decided who taught and where they taught, and participating in protest was required to be a part of the union and therefore required to teach. The geography and lack of infrastructure in the state of Oaxaca means that there are some communities that take hours of travel by bus over mountains to get to the capital, and yet union members must make this journey in order to continue to teach.

As I walked through El Zócalo I would take a second to weave through the tent-covered encampments and look at the teachers sitting around. It began to occur to me how trapped between powers each teacher was. The right of the teachers to protest is very important to me and I believe there is an incredible inequality in the allocation of resources and money in Mexico. There are many examples of this type of corruption by the government, but unfortunately the issue for the individual citizen – in this case, a teacher – is being forced to act as a pawn for a corrupt organization – the union – against the corrupt power of the government. Most everyone in Oaxaca knows a teacher and therefore is sympathetic to the needs and worries that bring them to occupy the city square, but the known corruption of both the union and the government make it difficult for anyone to come up with a solution or make sense of the situation.

About a week before I left Oaxaca, the governor sent thousands of federal police into the city to head off potential protests from the teachers. Police decked out with assault rifles and riot-shields stood in groups on corners and army helicopters flew overhead. It was intimidating, and yet the teachers remained in El Zócalo and citizens celebrated Guelaguetza with parades, costumes, and music. Instances of power, resistance, and celebration all exist simultaneously in Oaxaca and their interconnectedness is inevitable to the city’s functioning and invaluable for my continued understanding of its politics and future.

One thought on “Oaxaca in Review…”