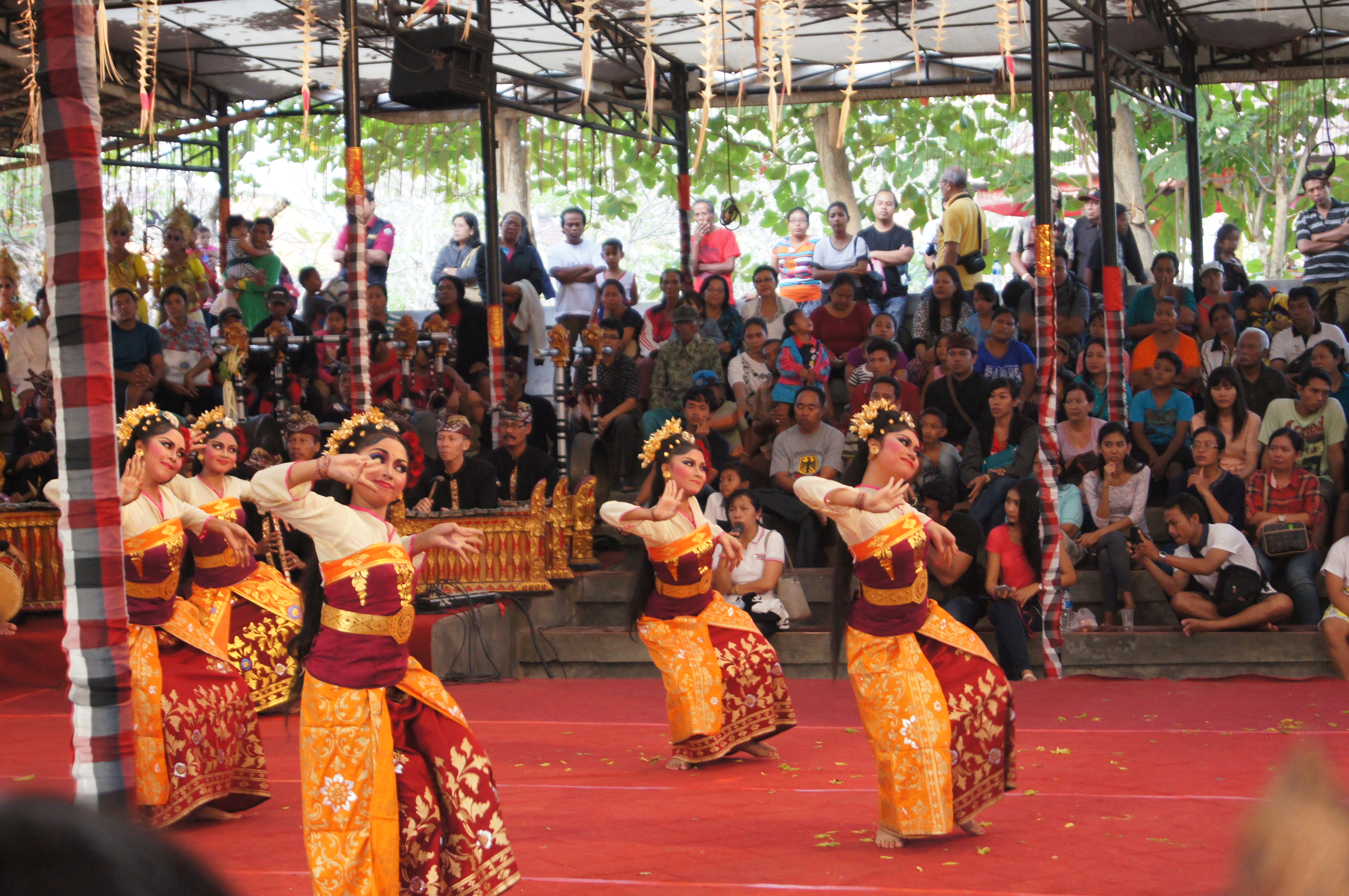 Hi everyone! My name is Maya and I am a rising senior studying educational psychology and performance studies. This research project is, for me, the continuation of a pre-existing relationship with Çudamani, a internationally-renowned group of musicians and dancers in the village of Pengosekan, Ubud, Bali; I studied Balinese dance with Çudamani in 2011. Working with the young Balinese artists of Çudamani also provides me a window into the local artistic culture of Bali today. The artists of Çudamani are responding to the effects of tourism and a growing international presence in part by working inside the traditional spiritual and social structures of their village: a family temple or “sanggar,” which is a central part of Balinese life. Their commitment to the community is exemplified their education and outreach programs, especially for youth of Pengosekan.

Çudamani also has an international education component; each summer they host a group of international students, providing the chance to learn with and live among these artists. For most of my time in Bali, I will be studying at the Summer Institute. This program is held at the sanggar, so the artistic directors of Çudamani have literally welcomed us into their home.

In undertaking this project, I have found that is very important to consider my own position as researcher: as both an American and a student of Balinese dance, how do I fit into the culture and politics of the organization, Pengosekan, and the larger trend of tourism in Bali? With these questions in mind, my aim in this research is to explore these intersections of performance, commerce, spiritual and social values through my own embodied experience. I also aim to collaborate on, and learn from, Cudamani’s educational and outreach activities.

Here at the sanggar, we have just finished our first week of classes. It has been an extremely busy week, with a mix of dance class and attending performances or ceremonies. We began the program with a Ngawit Ceremony, a Hindu-Balinese ceremony, which involves a local priest blessing the artists and the artistic work to come. This ceremony takes place whenever the group begins a large undertaking, such as a tour or important performance. We also attended a family temple ceremony called an Odalan, where the musicians played and a Topeng dance, a theater-dance form with masks, was performed. It was amazing to see the flexibility of the dancers and musicians, who performed in the house and in constant interaction with the many ceremonial activities. Both experiences show the way the arts and religion are deeply intertwined here.

In class, we are learning the male and female styles of dance, which have very different movement qualities. In Bali, balance is an extremely important component of philosophy and religion, so the male and female forms hold equal importance. The classes are very challenging, but also a lot of fun. As intensive as the classes are, everyone takes the time to check in and converse with one another and especially us as the newcomers. There’s a lot of laughter. These moments of connection feel equally as valid as the actual rehearsal. I think there’s a lot to learn from this approach.

We are being taught by the current Çudamani dancers, as well as master artists in the community. They are incredible artists and living historians about the development of Balinese dance over many centuries!

We also saw dancers perform at the Bali Arts Festival. This gave me a sense of the popularity of Balinese dance and gamelan, as the crowds are enormous, with thousands of people squeezed into the audience. The audience cheered and screamed—it can get pretty rowdy. Some of the Çudamani members explained that each regency of Bali pools their resources to fund their best performers and musicians to participate in this festival. Clearly, there is widespread popular support of the Balinese arts, and deep respect for the artists. I was trying to imagine the equivalent in the US, and I imagine it would be people treating a NY Philharmonic performance with the same excitement as an NFL game.

We also saw the musicians perform at another event, the International Body Music Festival, where they collaborated to combine stepping with Kecak dance, a Balinese dance/drama form that involves a chorus of percussive chanting. The result of Çudamani’s performance was fascinating as a form of cross-cultural interaction through innovative performance.

In reflecting on the week, I feel so happy to be back working with old and new friends and teachers, thereby expanding my understanding of Balinese performance. As a student and performer, I have a unique window on life at Çudamani, and how this unique group contributes to the arts scene in Bali. This research is allowing me to examine much more deeply how dance here reflects and preserves important cultural and spiritual values, in both ancient and contemporary forms.

3 thoughts on “Living Tradition and Innovation in Bali, Çudamani Institute 2015”