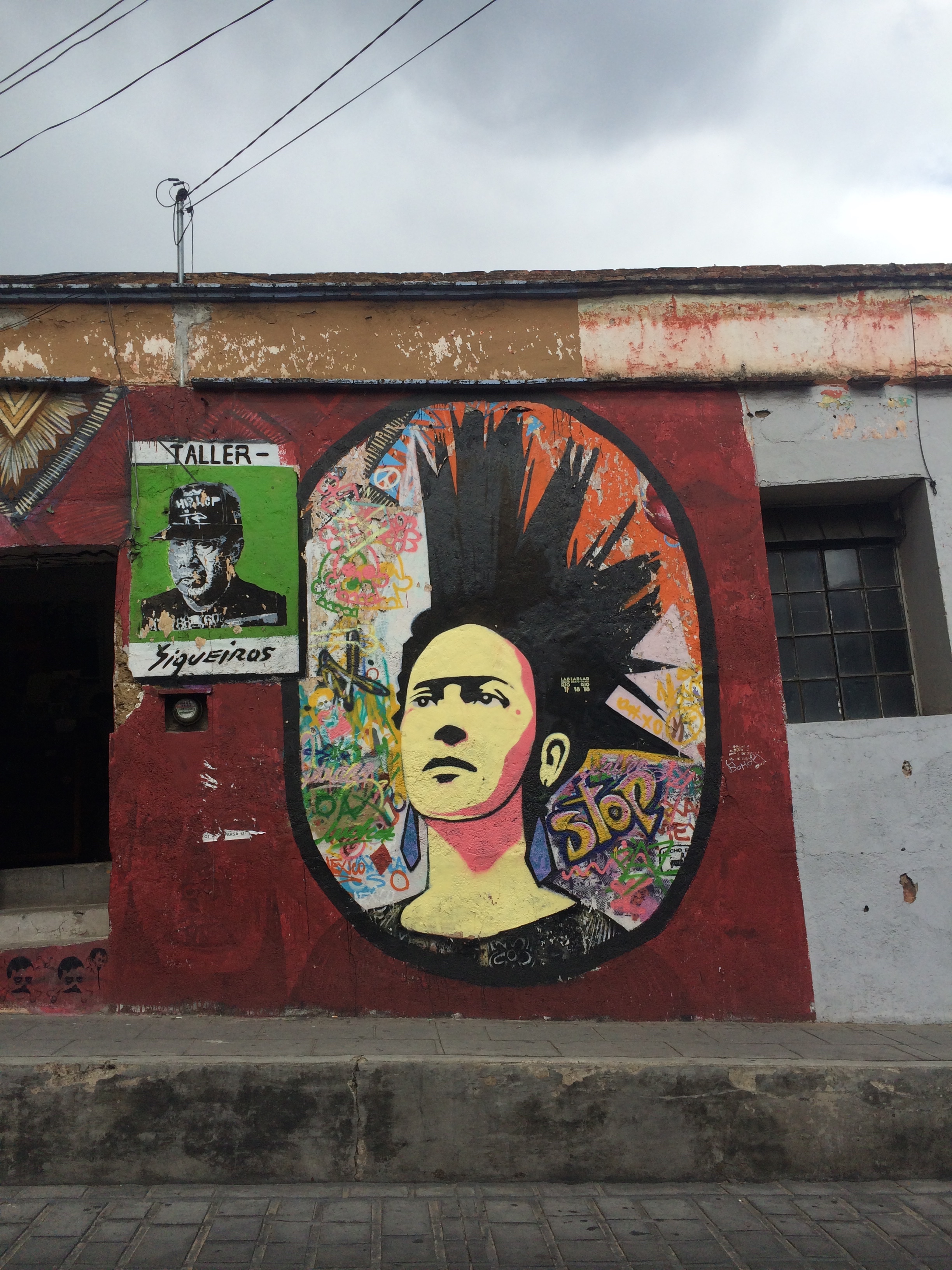 Hi everyone, this is Kitania writing from Oaxaca, Mexico. I’m about half way through my trip and I can’t believe what an energizing place Oaxaca has been for me so far! I suggest you all listen to this album by Beirut while you read my post, the album was inspired by a stay in Oaxaca — it’s just that type of place! https://www.youtube.com/watch?v=SiTgxG64q6s

The streets have always been a significant resource in social movements. They are the public space where grievances are brought to light through protest and they are the spaces where citizens from all walks of life pass by each other. It is the space where connection is possible and where it so often does not occur. The streets of Oaxaca have been a powerful political outlet in giving voice to the voiceless since 2006 and it is still apparent to me today as I walk around Oaxaca in July of 2015. The social movement that occurred in Oaxaca in 2006 lasted more than seven months, and yet, at its end not much had changed for the teachers who occupied the city square – El Zócalo– or for the communities in and around Oaxaca. Similar to the way street art chips away or is painted over, the past can easily be minimized. However nothing changes the fact that something was said on that wall and those people existed in El Zócalo for months.

I had been aware of Oaxaca’s history of political street art, but I was eager to see it for myself. I spent my first few days exploring the streets and searching for posters, murals, and even tags that suggested political aims or attitudes. There are pieces everywhere you look. I was also reading a book that I’d come across called Getting Up for the People – The Visual Revolution of ASAR-Oaxaca. It discusses the history and significance of the group ASARO (the Assembly of Revolutionary Artists of Oaxaca) that formed during the social movement in 2006. Although the seven-month standoff between the teachers and the governor Ruiz Ortiz was speckled with instances of violence by the Federal Preventative Police (PEP) towards the unarmed protesters, this time was nonetheless a time of inaction and neither side would give in. It was also a time when many Oaxacans felt silenced, that their experience was not being portrayed in the media. Oaxaca was in the midst of a prolonged conflict between members of the community and the government and it was in this environment that ASARO thrived, by providing an inclusive political dialogue within the most democratic and significant space they had – the streets!

As I was reading this book and exploring the political dialogue that still exists in the streets of Oaxaca, I found a member of ASARO, the artist Yescka, on Instagram and started following him. He immediately started following me back. A day or two later, I spotted a piece by Yescka – a six foot Frida Kahlo with a mohawk – outside of what turned out to be a gallery, and so I went in. There were pieces on the wall in the style of what I’d been seeing in the street and in my book, and in the back of the gallery I found a man working away. We started speaking in Spanish about art and Oaxaca and where I’m from and where he’s from and eventually we ended up on Instagram. I was confused because he had access to my profile even though I had it set on private… then I realized, this was Yescka! Next thing I knew he had invited me to an art opening in that very gallery that included his work and the work of other members of ASARO that Friday.

That week I hung out at ASARO’s other gallery/workspace/comedor where these young long-haired and tattooed artist guys make food every day. When they offered me a Corona, it always came with slices of itty-bitty limes and chili salt. My tacos came with a side salad (my first real salad in Oaxaca?) and the meal began with a nice spicy soup and Rosa de Jamaica. The guys were friendly but they also left me alone to do my work or read my book or practice my Spanish vocabulary in peace. Friday rolled around and that original empty gallery was packed with all the coolest young people in Oaxaca, as far as I could tell. Immediately upon entering I was handed a beer and a shot of mescal – “oro de Oaxaca” – and I soon found the few familiar faces I had there. Yescka was pretty excited – it was his show after all – but he was still glad to talk about my interests and we made a plan to meet the next night for a chat about his work.

We met in what was a much less crowded version of Friday night’s opening, seated on the spray painted couch and drinking mescal. I broke out my audio recorder and I only had to ask one question to get all and more than the material I wanted. He was happy to share his history and thoughts. He emphasized the importance of art on the streets being as close to the people as possible, that issues of class do not apply when everyone has access to art on their streets. After that we said our goodbyes and thank yous, and vowed that we would stay in touch. My work now is to translate our interview and fit it into my current understanding of Oaxaca from 2006 to now. Today the teachers are occupying El Zócalo once again, and the media, unfortunately, is very little help in expanding upon today’s – thankfully non-violent – demonstration.

3 thoughts on “The Streets Speak in Oaxaca, Mexico”