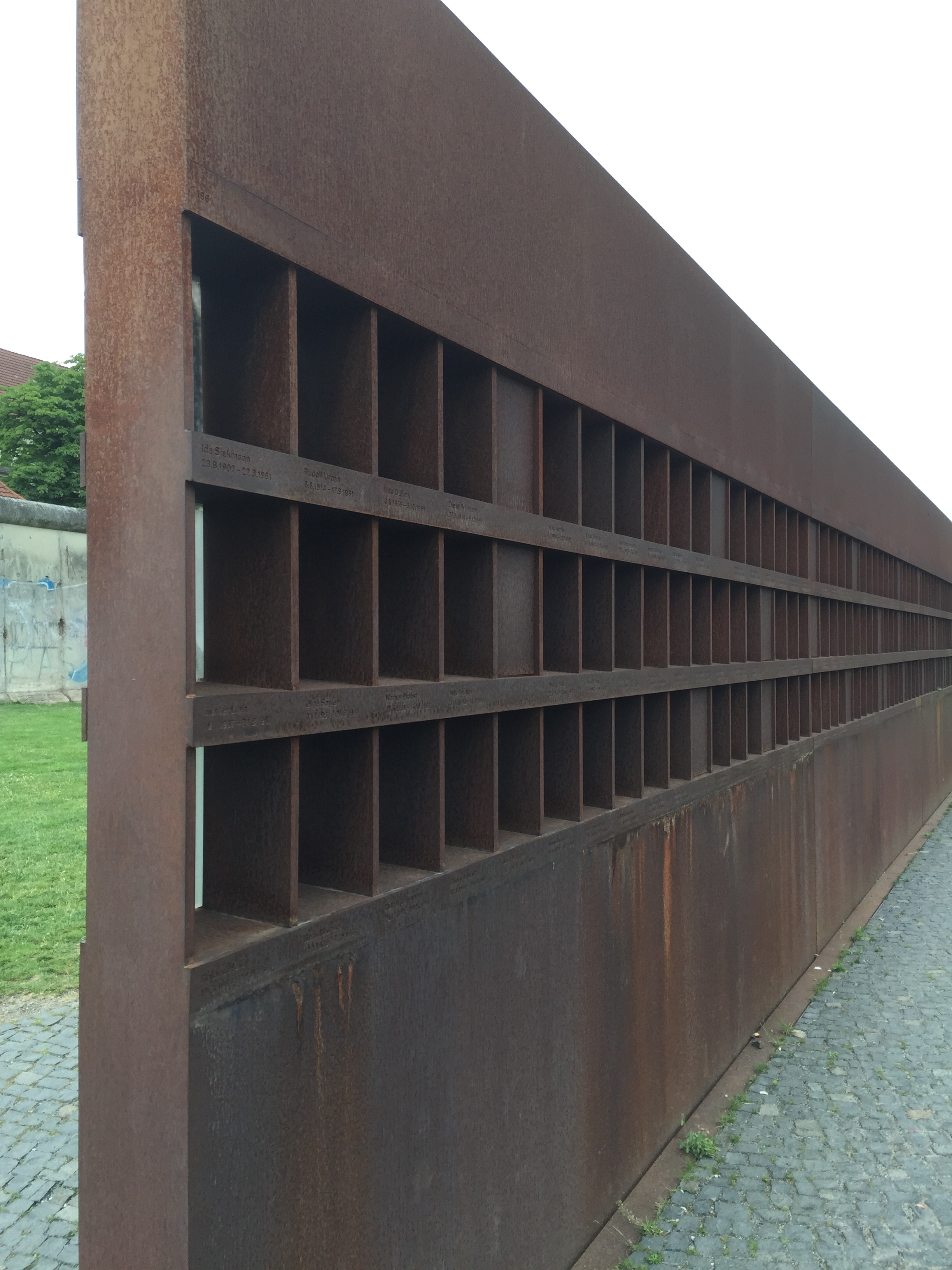 I can’t believe that my research trip is over! I’m still processing everything I read and saw while in Europe, but am excited to work through the material and develop the film I shot.

After Poland, I spent about two weeks in Berlin. Though I gathered an extensive amount of information, I also feel like I lost some of my research direction. I had originally intended to focus on the Berlin Wall, as well as three Soviet war memorials, however I visited many other sites that will probably be more supplementary in use.

I’ve been interested in the Berlin Wall for some time, having previously worked on a paper about pieces of the Berlin Wall in New York. Though the Wall may be physically absent from most of Berlin, the variety of sites and forms of remembrance — from markings on the ground and informational posts around the city, to more exhibitions and memorials, makes it feel present. I walked just a fraction of the Berlin Wall Trail, and I kept finding other forms of remembrance, which was both exciting and overwhelming!

I also began to think about the commercialization of history. Gift shop after gift shop sold “pieces” of the Wall. Regardless of the authenticity, the idea that an international symbol of ideology and of a historical moment, can be taken home by any visitor in a pocket-sized piece, is quite unusual.

My last stop was Prague, which seems fitting given my project inspiration came from a class I took while studying abroad there.

I focused on the Metronome in Letna Park. An enormous statue of Stalin once stood on the same base where the Metronome now does. The statue was unveiled in 1955, after Stalin actually died, and was blown up in 1962  — several years after the cult of Stalin was denounced.

Today, the site is used by skateboarders, swing-dancers and residents hanging out. A bar, called Stalin, recently opened for the summer and is using part of the base as storage space. I was able to walk around inside, which was incredible!

I also spent time working in the National Archives. This was an amazing opportunity, but my lack of language skills was frustrating (though thanks to Google Translate, I was able to get a sense of what I was looking at).

I also discovered several relevant memorials, which though I had passed several of them before, I didn’t truly see them until I went looking for them. The spaces they occupy are in busy areas of Prague, which makes for an unusual dynamic: many people pass them each day, but they also blend into the landscape.

Each place that I visited during my research had a unique landscape of memory in relation to Communism, and often one still shifting. The individual context of each place played a large role in questions of state-participation in formal memory, as well as towards questions of preservation and dominant narratives.

I am grateful for all of the help and support from faculty at NYU Berlin  and NYU Prague, who enriched my project and agreed to be interviewed. I would also like to thank my friends and family for their support!

I’m not really sure how all the pieces of my research will ultimately fit together, as there are a few different directions I could go in. I’m hoping to use this research and my photographs for a potential senior project, and am looking forward to its evolution.

2 thoughts on “Manifestations of Memory in Berlin and Prague”