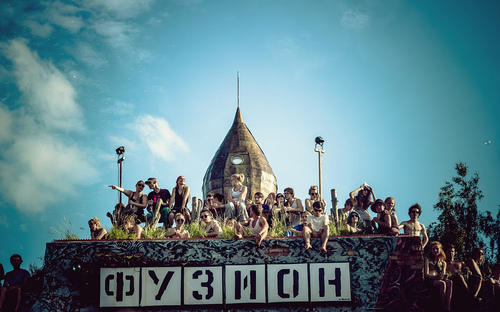 Every year for the past two decades during the last week of June, Berlin’s music scene has emptied out as tens of thousands pack the trains and travel 90 minutes North to create a weeklong countercultural music and arts festival in the hangers, bunkers, lakes, and fields that form the grounds of an abandoned central Luftwaffe test facility. Фузион, pronounced fusion festival, gains its Cyrillic name from lettering left behind on the hangers by the Soviet Red Army. The festival allows no advertising on its grounds nor do they release any press material or advertise themselves. The lineup isn’t announced until festival-goers make it through the gates. Despite accommodating over 60,000 people it has remained comparatively quiet and Berlin-based for this reason, but within the Berliner community its huge.

This last week I went to experience it and it reminded me of the Bay Area renegade/ Burning Man culture I grew up with, in its approach to self-reliance amidst holiday communism and sustainable hedonism. While electronic dance music is a core part of the festival, it was much more than that. Every genre was heavily represented from Reggae to African Folk, and people brought their own instruments, costumes, and artwork. There were a ton of art installations, from pirate ships on the beach to massive blooming electronic flowers in the forest and it felt like every square meter had something small and intricate.

The sprawling compound stretched from lakeside beaches to crumbling concrete military buildings to a trippy forest Oasis and encompassed 21 stages (not including all the musical art installations such as the pipework plugged into a distorted amplifier so your metal water bottle became a dubstep drum stick, or the roving art car speaker systems, or the traveling bands such as the circus performance that incorporated a head the size of a car and an entire brass section). At the heart of it all was the Turmbühne stage with its futurist skyscraper towering upwards from the center of the dancefloor, surrounded by a ring of intricately constructed scrap-metal dragons which alternately glowed in multicolor and spewed fire that heated the dancefloor so intensely a cigarette I was holding burst back into flame, spluttering sparks onto my hand. Huge cantilevered Funktion-One speaker systems hung from cranes which swayed to adjust for the impact of incoming storms (the same iconic cone speaker stacks that make the sound in Berghain so incredible). Berlin’s Techno scene has been an epicenter of debauchery and alternative lifestyle for the past two and a half decades, but in many ways its actually quite conservative. People have so embraced the alternative that its simply become the Berlin norm. Ripped black skinny jeans, leather, and metal buckles might have seemed mildly counter-culture when they migrated over from the West Berlin punk scene at the tail end of the ’80s but now the line at Berghain just appears monotonously repetitive (though I was dancing next to a girl in a bubble gum pink dress there the other night so there’s still space for eccentricity). Techno is itself a very rigid format in comparison to most music – it’s four on the floor beat and slow progressions gain power through the trance-like state they can create, but an obsession with authenticity in Berlin can damper creativity. The love of well-established DJs and dusty vinyl can overshadow new acts and technologies.

Berlin is becoming more international by the second. The abandoned spaces that became Ufo and E-Werk and allowed for this scene to thrive have all but been filled up by those dancing in the successors of those hallowed halls. Gentrification is exploding as Europe’s hippest, cheapest, youngest metropolis attracts new people to a culture that was founded by transplants and expats (though the lines were much different then). When other cities have gone through growing pains like these (see: NYC) the influx of other cultures has a damaging, distorting, or amplifying effect on the city’s lifestyle depending on who you talk to.

This is why Фузион festival is a uniquely exciting place – it is at once both a showcase for hundreds of local musicians and a party filled with languages from all over the world. Its very name embraces the concept of fusing multiple genres to make something new, and there was no better example of that then on Saturday night when we heard electro-swing blowing through the forest.

Electro-swing – the musical fusion of 1920’s jazz, 1930’s swing, and modern electronic – is a huge movement in Berlin at the moment with shows every weekend and graffiti murals proclaiming the Electro-Swing Revolution! along the canal, so when we heard some Parov Stellar-esque notes we assumed it was just a DJ throwing one track into a mix. But then the sax began to sway and drift away from the rest and it was alive. Through a clearing in the trees we found a crowd gathering around the musicians; at center stage a woman with frosted braids was singing liltingly in a dragon kimono before suddenly switching to guttural, poisonous rap. Their set had turntables mounted on crates of vinyl, bears spitting rapid-fire Spanish rap, sax solos from well cut suits, unexpected extended drum and bass interludes, and a graffiti mob live painting a drunken stumbler and then ducking into the shadows when he turned around. There were blistering guitar solos, can-can circles, rain lightly misting over the eaves, fireworks exploding in the distance, and people skipping and jumping so hard on stage that the record player needle hopped along. It was a lovely evening and only one of hundreds of sets throughout the week, part of a much larger movement that’s still progressing after the train ride home. One thought on “Фузион and the Future of Berlin”